In this part, I want to take a look at transmission lines not as ways to get signals around your station, but as circuit elements.  They can be deliberately used as transmission lines or they can show up and surprise you.  Since nobody comes into your workshop and solders coax down when you’re not looking, let me go into how that could happen first. 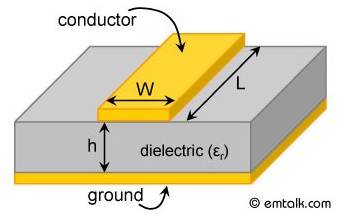 Doesn't that look like a simple double-sided PC board?  That's because that's all it is.  Just running a trace to some spot on the board for a ground connection makes that trace a transmission line. There are various ways to calculate what the width and height above ground need to be to get a desired impedance, or to calculate the impedance of lines you created accidentally. For a typical G-10 (usually FR-4) circuit board, 1/16” thick, the width of a 50 ohm line is about 110 mils (0.110”). Practically speaking, small differences in impedance don’t matter much so it’s not extremely sensitive to the width.

I’ve used the antenna equation for the length in feet of a quarter wave monopole antenna, 234/f, many times.  The number is about 5% short of a quarter wave in free space because of what are called end effects – mostly extra capacitance at the end of the wire.  The actual number in free space (a vacuum, but virtually the same as in air) is just as easy to remember: 246/f.  Electrical length is longer with any dielectric (instead of the awkward to type here “epsilon”, I’ll use e), in particular divide the answer by the square root of the dielectric constant er.  For one of these G-10 PWBs, er is close to 4, so you divide the calculated length by 2.

Let’s say you’re building something for 1300 MHz, a popular amateur allocation.  Grounds have to be within 0.230” to be within 1/20 wave.  What happens if the path to ground is longer?  The part starts losing its ground so the RF voltage begins to “float”.  At 1/8 wave long, a line shorted to ground at the end becomes a perfect inductor with reactance equal to the impedance of the transmission line.  In microstrip, deliberate microstrip or not, the skinnier the trace the higher the impedance (it’s not a simple relationship; half the width is not twice the impedance).  That means a narrow 1/8 wave line is a high impedance inductor to ground.  That’s not going to behave they way you want!

This why RF breadboards (prototypes) are built with a lot of ground everywhere, and tend to look like this more than neat little circuits with lots of wires at right angles to each other.

There’s a component circled in red.  That’s a 10 megohm resistor being used as point to solder a few parts to – a standoff.  The circuit is low impedance so virtually nothing flows in the resistor.  That’s an old trick, too.

If there’s any reason why RF design has gotten the nickname of “black magic”, this is probably where it comes from.  I’ve always told the new grads I mentored that if you think it’s black magic you’ll never be any good at it.

Let’s say you have a way of stretching that line – a transmission line that’s open-circuited or shorted to ground – and you make it longer?  What does it look like as it gets longer? 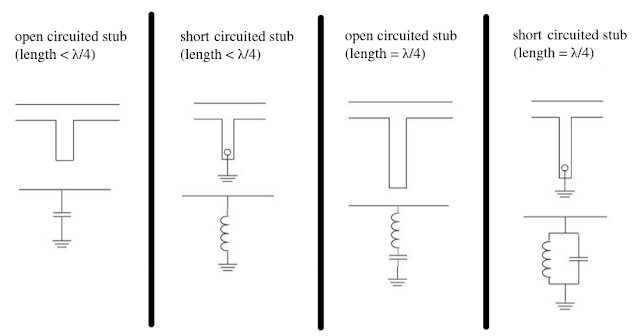 This is funky to read, but it’s saying that when the line is very short, it looks like a small capacitor if the end of the line is open or a small inductor if the end is shorted to ground.  As the line gets longer, those values increase until by the time you get to 1/8 wave long the cap or inductor reach the value of the impedance of the line.  As the lines get longer, you start to add reactance of the other kind.  The open line starts to add some capacitance and the short circuited line adds some inductance.  By the time you get lines ¼ wave long, the open circuited line becomes a series resonant circuit.  That means it’s an RF short circuit to ground that’s a DC open circuit.  The line that’s shorted to ground becomes a parallel resonant circuit which is a high impedance; it’s an RF open circuit but retains its DC short circuit.

If you could keep stretching this imaginary transmission line, you’d find that at 3/8 wave length, it behaves like 1/8 wave again with the opposite sense; that is, an open circuit line becomes an inductor and a short circuited line becomes a capacitor.  At ½ wave, it starts over again and behaves like the left side of that chart.

Like antennas, transmission lines work the same on odd harmonics of the frequency you cut them for: 1/4 and 3/4 wave for example.  That means an antenna resonant on 7.100 MHz will be resonant on 21.3 MHz.  A 1/4 wave stub that shorts 7 MHz to ground will short 21 MHz to ground as well.  In practice, small imperfections in the way something is built that have negligible effects at the lower frequency can affect the higher frequency more because they become bigger fractions of a wavelength at the higher frequency.

Always think of the size of components - including wires - in terms of a wavelength and how big the parts are.