SpaceX seems to be getting its processes down better at Boca Chica.  Earlier in the week (last Thursday?) they announced a road closure for a static fire test Sunday (yesterday).  Unlike SN5, which took several days with several aborts before they could achieve the static fire, yesterday they successfully static fired the Raptor engine for about four seconds.

Thanks to new Blogger Editor, I can't even test that, like I used to, but it should start about 10 seconds before the ignition.  If that doesn't happen, you can advance it manually; the firing is it about 28:25.  Or see below.

The longer story is that they also had two aborts, followed by detanking the prototype and sending a team to the test pad to troubleshoot and fix the system.

SpaceX’s first SN6 static fire test window – published by Cameron County in the form of road closure notices – was set for 8 am to 8 pm CDT (UTC-5), August 23rd a few days after the Starship’s cryo proof. The first test attempt began around 9:30 am but was aborted soon after as SpaceX employees returned to the launch pad to (presumably) troubleshoot. The second attempt began around 2:30 pm, leaving a little less than half the test window available.

Attempt #2 very nearly managed to extract a static fire, aborting possibly a second or less before Raptor ignition around 3:41 pm. Once again, SpaceX teams returned to the pad after Starship was detanked and safed, briefly inspecting the general location of the rocket’s Raptor engine before once again clearing the pad around 6:30 pm. At long last, Starship SN6 began a smooth and fast flow that culminated in the ignition of Raptor SN29 around 7:45 pm, just 15 minutes before the end of SpaceX’s test window.

I think it's fair to judge their progress by how fast they go through these tests, since the plan is take multiple launch hops for these prototypes.  This was the first scheduled day vs. for SN5 (my notes just say it fired successfully after several delays).  SN7.1 is another prototype to be destructively tested in the near future, and SN8 is going to be the next step closer to a full Starship prototype with nose cone and fins.  As for SN6, it's just getting started.  The scheduled date for its first hop test is Friday, with the next couple of days as potential backup days.

SN6’s first flight is expected to be an almost identical copy of Starship SN5’s highly successful August 4th debut, following the same 150m (~500 ft) parabolic trajectory. Filed before SN6’s August 23rd static fire, SpaceX has penciled in Friday, August 28th for Starship SN6’s own hop debut. Thanks to the fact that SpaceX was able to complete both SN6’s cryo proof and static fire on the first day of their respective test windows, August 28th is likely well within reach. Stay tuned for updates as Starship SN6’s hop debut schedule solidifies.

These are small steps along the path to a functional Starship prototype but they still feel historic.  It seems likely that we'll see a flight to about 12 miles up from one of the Starships within weeks (everything we've seen so far is just a prototype of the second stage).  It's possible we'll see the first prototype of the first stage, Starship Heavy, before the end of the year. 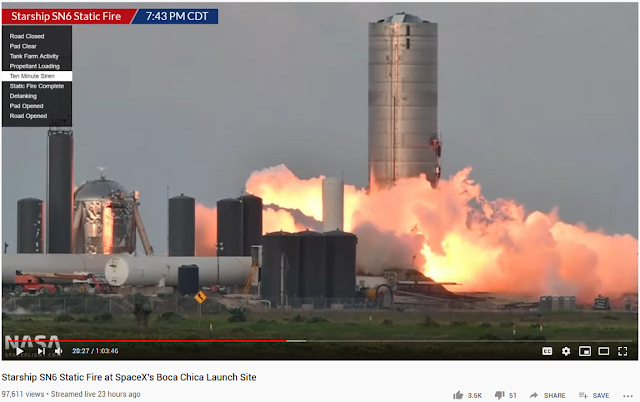 Closer to home, we'll see the Argentine SAOCOM-1B satellite launch on Thursday evening at 7:19 EDT (2319 UTC).  I've written about this launch several times; it will be the first launch into a polar orbit from Cape Canaveral since 1960.  Finally, Saturday morning at 10:31, we should see another Falcon 9 launch the next batch of 60 Starlink satellites.  Those are the last launches with published dates at SpaceFlight Now.