I Think It's A Valve

I've been documenting my progress on the valves in the Webster engine for a while now.  I think it's time to say my test valve has taught me all it's capable of teaching and declare it done. 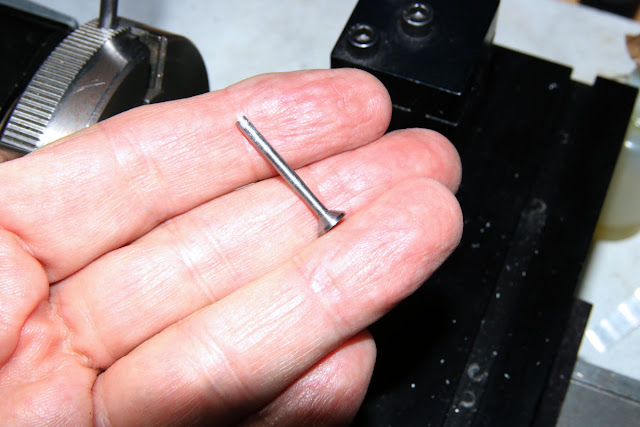 The major difference between this state and the view I posted last weekend (7/25) is  that I performed the size reduction from oversized about .004 down to a sliding fit in the test piece, reamed to a .094" hole.  That was done by turning the piece on a strip of sandpaper.

The critical part here was making sure the stem came out the same diameter on the three sections I cut.  There's a tendency for any part to deflect due to cutting forces and the bending moment is greatest when cutting at the far end.  I cut the far and middle thirds of the stem .005 at a pass (radius).  The test cylinder was a little tight just before the taper, but rattled over the first 2/3 of the stem. A micrometer showed it was undersized where the test cylinder was tightest and the rest of the stem was the closer to the right size (working from memory here and I don't remember the size).

I haven't quite understood that, but if there's any real lesson it's the one I already knew.  Measure twice several times, cut once.