Hat Tip to the Blaze, I read that a group of BLM activists en route to Washington D.C. got into a disturbance with property owners in Bedford, Pennsylvania.  According to WTAE in Pittsburgh, the Pennsylvania State Police released the following statement.

"The Pennsylvania State Police (PSP) Troop G Bedford station was contacted by a property owner on Monday, August 24 at 11:18 p.m. regarding a group of people in a private business parking lot. Troopers later learned the group was comprised of approximately 30 activists who are traveling on foot and in vehicles from Milwaukee, Wisconsin to Washington, D.C. At approximately 11:35 p.m. at the same location and before state police arrival, the property owners confronted the activists. The confrontation escalated, and gunshots were exchanged between the property owners and the activists.

"One of the activists was struck by birdshot from a shotgun. The man was treated and released from the Conemaugh Memorial Medical Center, 1086 Franklin Street Johnstown, Pennsylvania.

"A shotgun, shotgun shells, a semi-automatic pistol and 9mm casings were all recovered at the scene."

Note that was Monday night, so well in advance of the open conflict in Kenosha last night.

As usual, it's not really known exactly what happened, and this story is particularly hard to figure out.  The WTAE article interviews representatives from the demonstrators, who (of course) act as if they're perfectly innocent choir boys and had nothing to do with causing trouble.

In a video posted early Tuesday morning to Facebook, marcher Tory Lowe said the group had parked to organize before they walked up an incline when a man emerged from a house and started shooting at them with a rifle, firing at least seven shots.

"He was like three feet away from us shooting and I told him there was a minister here," Lowe said in a video posted to Facebook.

Wait... firing seven shots from three feet away and nobody got hit?  That's strange.  Then the article goes on to say

It's important to note that in the video, the sound of a gunshot is heard before a person across the street emerges from their house and confronts the group walking down the road. You then can hear more gunshots, and at some point the people across the street can be heard saying something to the activists. In its first press release, state police said an argument happened and then gunshots were fired.

So the official story doesn't match the station's story and, as always, neither story may match the truth.

The article at The Blaze goes into some other incidents before and after this incident.  They're a roving band of troublemakers crossing the country, from Milwaukee to DC.

Still, in light of the shooting I would say the evidence is that the "mostly peaceful protests" that have led to widespread property destruction as well as tremendous human suffering have gone to the next stage.  The Rubicon has been crossed and those people who are losing everything have started fighting back.  It's hard to imagine the Antifa/BLM side backing down at this point so I can only see it getting worse for the foreseeable future.

My blog brothers down at Gun Free Zone in Miami have linked to a Michael Bane blog post that seems to be worth reading.  I don't think I can add anything to his list except maybe to emphasize situational awareness, what your city is like, what your neighborhood and the next neighborhood over are like, from state level down to your neighbors.  Think about the things you've seen happening, like being harassed in a restaurant or having lights shined in your windows in the middle of the night, and decide how you're going to handle things.  Having a plan, any plan, puts you better off than the vast majority of the population. 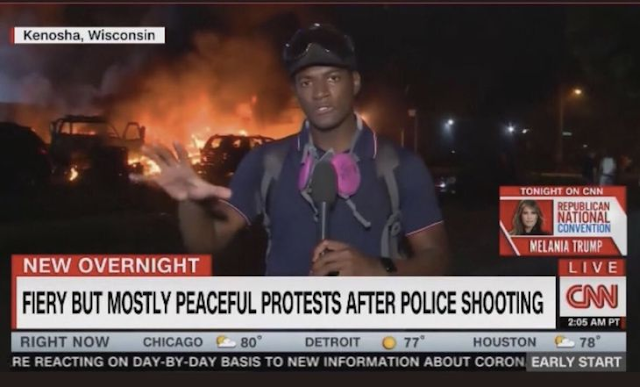 By now, everyone has heard of this CNN story and seen the display.  “Fiery but mostly peaceful” sounds like it could describe a cremation.  A funeral pyre.