Back in March, when Congress passed the CARES act - the creation of (allegedly) $2 trillion out of thin air - somebody, somehow, came up with the number $600 per week in extra unemployment insurance for victims of the COVID shutdowns.  That benefit expired on July 31st and since congress is incapable of working on anything that might not make their party look better than the other guys, that benefit is gone.  The president, as everyone must know, signed some executive orders to re-purpose other federal funds but couldn't come up with more than $400 - and $100 of that comes from telling the broke states with low tax revenue to pay it.

Since the topic was in frequent discussion, I started wondering where $600 came from.  It seemed like an arbitrary figure; I mean why not $500?  Why not $750 or any equally arbitrary-sounding number?

Like many people, during the financial turmoil of the end of the 70s and early 80s, I was unemployed for a while and received unemployment.  At that time, there were no Federal benefits, it was entirely state run, and the benefit was set at a percentage of your pay while working.  I seem to recall it was 50%, but that's hazy.  I only got one check and had to wait 6 weeks to get it.

Then, last week, I heard a number that added detail to something I'd heard in the preceding months.

Additionally, one in every five (20%) eligible workers would receive benefits that were double their lost earnings.  That's awkward.  We know the intention was that since this isn't normal unemployment due to typical circumstances, the Fed.gov, in its infinite largess, would try to remove the gap between what the people made on unemployment and what they were earning.  They just overshot.  By a lot.  Another MarketWatch article included a short note on where $600 came from.

... according to a paper titled “The Effect of Fiscal Stimulus: Evidence from COVID-19” circulated by the National Bureau of Economic Research on Monday.

So the National Bureau of Economic Research read tea leaves or did a seance and decided that the more money you give unemployed people, the more they spend.  Genius!  Who would have ever thought of that?  I mean besides anyone who can fog a mirror.

Let's stop for a minute.  Let me throw some numbers around.  Let's assume the person receiving the unemployment was working 30 hours a week at the Federal minimum wage, $7.25 (leaving out paradises like Seattle that have enacted higher minimum wage laws).  They were grossing $217.50/week and taking home roughly 80% of that or $174.  Let's assume the state unemployment was 50% of their regular pay, or $87/week.  Now the Feds come along and give them $600/week on top of that.  That $687 total is almost 4 times their previous take home pay.  Do you think that might not make looking for a job their biggest priority in life?  Just sayin'.

In every state, the median earnings-replacement rate exceeded lost wages, ranging from 129% in Maryland to 177% in New Mexico.

What makes sense?  No flat dollar amount like those makes sense for the entire country.  If nothing else, the picture differs from state to state and even within a state where minimum wage laws change.  What makes sense to me is to restore their unemployment to 100% of their take home from work.  But that would require something other than just running the printer or automatically depositing checks in people's accounts.  It would take work on the Fed.gov's part. Which would cause a slowdown and inevitably end up in laughably wrong results. 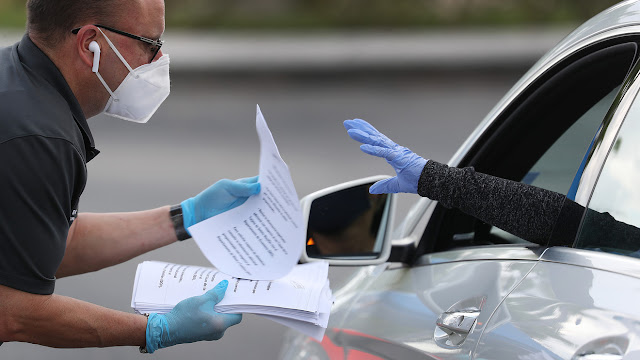 A Florida handout of unemployment applications in April. (Photo by Joe Raedle/Getty Images)