And Now For Something Completely Different

I'm acutely aware of the troubling reports coming from all around the country, as all of you are, but I have a hard time thinking I can make a meaningful improvement to the signal to noise ratio of what's being said around the blogs.

But every so often, I come across something so bizarre that I have to share it.  Like many of you, I have more than a passing interest in photography, and have been trying to be a better photographer since the early '70s.  I subscribe to a weekly newsletter called Digital Photography Review, which is gateway to many features necessary if you're evaluating a choice of a camera or lens.  Along with a weekly dose of photography news.

Today, a feature article was the Potato Photographer of the Year.

Yes, you read the headline right. The Potato Photographer of the Year is a real photo contest and this year’s winners have been announced.

If you’re wondering where the idea for a potato photo contest came to be, look no further than Kevin Abosch’s Potato #345 (2010), a now-famous photo of a sole starchy tuber that sold for a wallet-mashing one million dollars in 2016, making it the 15th most expensive photo sold at the time.

The contest had the noble aim of raising money to end hunger and poverty in the United Kingdom - which is reminiscent of the Miss Universe contestants saying they want to bring world peace.  Since people have been committed to ending hunger for all of recorded history, we can be sure they're not going to do it with the proceeds from any contest, let alone one for a small niche market.  Nevertheless the contest was held, and the article linked shows the top 10 photos.  Allow me to present the winner (reduced from the full size version they post): 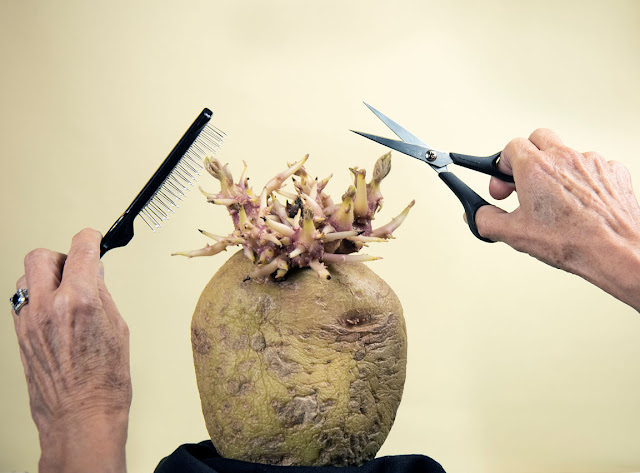 Caption: 'This picture manages to introduce a topical lockdown obsession to the brief of photographing a potato. It takes a great imagination to see a sprouting potato as a head covered with hair, and there is a lot of humor in the way the picture has been executed.' – Nigel Atherton

Judge’s comment: 'This is delightful, imaginative, and a good laugh. And again, a bit bonkers. What we all need at this grim time. Love it!'– Paul Hill

It's a gallery of goofy, bizarre photographs - the top 10 entries in the contest.  Every one of them is worth looking at and reading the short descriptions.