If you like all those aspects of modern life we've become used to; bridges that don't fall down, cars that just run, aircraft that don't fall out of the sky, things like that, you might want to get involved with your local school board.  The "math is racist" nonsense is really getting out of hand.

Stephen Green at PJ Media has gotten a little deeper into the subject in his regular "Insanity Wrap" column on PJ Media web site.  It has gotten worse since I last looked at what the advocates were saying back early in the Obama years, about 2011.  I downloaded a file from Radical Math and their emphasis was that thinking about math was too foreign to some people and the teachers needed to make it relevant to their lives.  Now it's gone hard left and the arguments are that math is part of systemic racism and white supremacy. 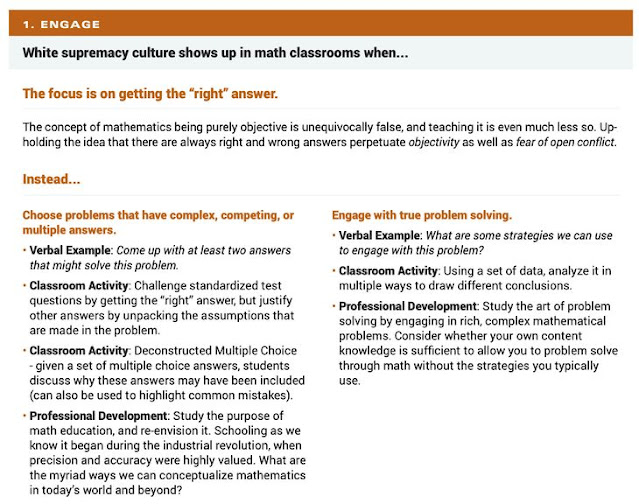 The 82 page pdf document contains month-by-month programs for the math teachers, September to June.  This is the summary of the teaching goals for April.  I want  you to really look at the bottom paragraph on the left and this sentence in particular:  “Schooling as we know it began during the industrial revolution, when precision and accuracy were highly valued.”  There's no need for precision and accuracy today?  To hand the floor to Green.


Today we build little four-banger car engines that produce more than 300 horsepower, reusable rockets, entire constellations of communications satellites operating in every imaginable orbit, and stealth jet fighters that lose their near-invisibility if a single element is slightly out of whack.

But no, this modern age of ours no longer values precision or accuracy.

Well, we’d better, if we want to prevent the whole damn system from falling down around us.

We could do days on the need for precision and accuracy.  How about landing Perseverance on Mars after seven months and hundreds of millions of miles of travel?  How about creating rocket engines and getting the analyzed performance out of them?  Digging underground tunnels and having them meet up properly?  The world offers tons of examples.  Do these "teachers" think that precision and accuracy only come from the computers?

This "2 + 2 = 4 is racist" nonsense is a dire threat to the kids in school and to everyone in society by the time they're working for a living.  In particular, as Green put it:


Real racism is telling black and brown kids that wrong answers are OK, and thus condemning them to second-rate educations — if that.

They would do much better for their students if instead of that, they told them that "I'm bad at math" is just a myth.