What’s All This Gold and Weiner Stuff, Anyway?

This past week, Congressman Anthony Weiner (D – Wolf 359) started a campaign against Glenn Beck and Goldline, a company that sells gold coins and bullion. Beck has responded by (1) making fun of his name and (2) posting real facts from good sources that contradict Weiner. Perhaps the most stupid argument was that you shouldn’t buy from Goldline, just buy the gold ETF, ticker symbol GLD. I subscribe to Beck’s website, originally because I found him funny, but really have no dog in this fight. I am not a customer of Goldline, and I fund this blog entirely anyway (notice there are no ads?) as long as my day job holds. The arguments against Goldline are easy to refute and irrelevant, largely just a harassment tactic (get your “enemy” off message, off balance and out of their comfort zone). What I want to talk about is gold, economics and investing.

As mature adults, we are beyond making fun of the name “weiner”.Heh heh, heh heh. He said "weiner".

In the summer of 2000, Mrs. Graybeard and I took a course in lost wax casting - the process by which most jewelry and many small, fine-detailed mechanical parts, are made. We cast several pieces in silver and for my final project, I wanted to work in gold. I noticed gold was around $250/oz., and that seemed cheap. I didn't follow the price of gold, but remembered prices in the $700 - $800 range in the early '80s. As it turns out, that $250/oz was just about the dead bottom of a multi-year bear market in gold. 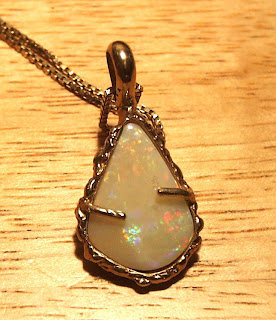 Why is gold around $1200/oz now when it was $250/oz in the summer of Y2K? Why is oil high when demand is low from the big consumers? Is it those "ebil, debil speculators?" From watching the cable TV channels talk about stocks and other investment vehicles, and from other observations, I'm convinced most people - even people who advise on stock and other financial instruments - don't understand inflation.Most people don't even really understand our financial system.

Around that time in Y2K, it was occurring to me that my 401k had not grown as fast as I'd like and maybe I should do more than just follow the standard recommendations. So I started reading about gold along with other investment opportunities. Remember, this is late 2000; the tech bubble had just burst. I lost money in that like everyone. The real estate bubble had not started. I found that in the '70s it was standard advice to have about 20 to 30% of your IRA in gold as a safe haven, "just in case". As my research moved on, I started to read the commentators on Kitco.com.

I quickly encountered a group of people called "gold bugs" who seemed like a lunatic fringe.  They vocally say "gold is money" and "all fiat currencies (like the dollar) eventually collapse", "inflation is going to get worse" and so on.  I thought they were lunatics.  I was more interested in the technical analysts who pointed out demand was getting ahead of supply for gold and the time needed to get a mine deposit found, developed, and producing gold (about 10 years) means that the demand will exceed supply for a long time.  Can you say increasing prices?  So I found some ways to include gold in my retirement plans, and have happily watched it do well as everything else is having troubles.

Then a funny thing happened.  Some of the "lunatic" gold bugs' predictions started coming true.  About 2005 (I think), I started reading predictions of problems related to something called "sub-prime mortgages" that I had never heard of, and they warned that it had the potential to take down the entire world's economy.

For you people who still think this just isn't mainstream enough for you, would you listen to Robert Kiyosaki, whose "Rich Dad/Poor Dad" series has become a wealth building franchise and a staple of fund-raising events on Public Television?  One of his guys has a book called, "Guide to Investing in Gold and Silver".


If that's too staid, the "Angriest Guy in Economics", the Mogambo Guru, might be more your speed.  A little tough to "get" the first time I read him, I eventually thought if you took a classic Robin Williams full-tilt-bozo comedy bit from the late 70s and made it about economics, it might sound like the Mogambo.

In the 70's, a guy named Howard Ruff wrote a book on how to survive the inflation  of that decade.  He's still around, and following one little piece of advice from his book has made me thousands.

Inflation is always a result of monetary policy.  Always.  How does inflation occur?

And that's what the Federal Reserve is doing.  By flooding the markets with "liquidity", they really mean currency.  They used to release data on the size of the money supply, but stopped some years ago.  I assume it was because they thought it was too scary for us hicks to look at.  Too much negative feedback from economics writers.  Ben Bernanke, who was just a member of the Federal Reserve board at the time, famously said (in response to questions about deflation, in 2002), "The U.S. government has a technology, called a printing press (or, today, its electronic equivalent), that allows it to produce as many U.S. dollars as it wishes at essentially no cost,"  What would you think if you had a big pile of dollars, like OPEC or China or the various countries that we buy from?  You would think, "If there's much more of them, mine will be worth much less; I'd better store my wealth in something else".  Exactly that happened, and the price of gold spiked immediately after his statement.  The image of the Federal Reserve dumping baskets of currency out of a helicopter was coined by economist Milton Friedman.  Bernanke's remark about the printing press earned him the nickname "Helicopter Ben" (don't remember where I stole this picture - if it's yours and you don't want me to use it, just comment). 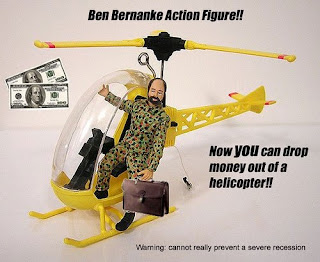 Bernanke also said, "people know that inflation erodes the real value of the government's debt and, therefore, that it is in the interest of the government to create some inflation."   Maybe, but it's not in the population's interest.  The problem is that if you're a saver, your money is going to be devalued by that inflation.  If you are living on a retirement pension, social security or some other similar benefit, you are screwed.  The government horribly understates the cost of living because they don't include food or energy costs.  Your social security cost of living adjustment will never keep up with the real cost of living.

And that's largely why oil is expensive today, despite low demand.  Oil costs more dollars because each dollar is worth less.  Thinking oil seems very expensive is like everyone on the Titanic thinking the water seems awfully high, not that they're sinking.  Think the stock market is doing well - or was?  Have you seen the DJIA or S&P 500 corrected for inflation?  Corrected for inflation, you are loaning companies money for about 1.6% per year return.  Some periods are less, others are more.  The $1200/oz price of gold includes inflation and increased demand due to the widespread concern that the worldwide currency system is failing.

We call our dollar a fiat currency because it's worth is declared by fiat.  It's worth exactly what someone is willing to give you in exchange for one.  We do not promise any amount of gold, silver, wheat, rice, pebbles or manure in exchange for one.  Inherently, it's only worth the paper and ink used to make it.

Money is different from currency: currency is the paper and base metal coins you have in your pockets while money is something that has value and is used as a medium of exchange.  For much of history, money was gold or silver.  People on Yap Island used large stone rings.  Paper money was invented as a way around carrying large amounts of coins.  I've heard it argued that there is nothing special about gold or silver and that's true.  They are simply something that has a universal history as valuable.  People want them.  You could theoretically have a fiat dollar like we do and have it be stable.  It requires politicians, bankers and everyone involved to be honest, and responsible.  It requires politicians not create vast amounts of currency so they can deficit spend, go to war, hand out food, healthcare or any of the other things governments do with this made-up money.  In other words, fiat currency will never work in the long term.

The basis of money only has to be agreed upon, relatively portable, and dividable (diamonds are out: you can't cut one to give change).  Gold and silver fit the bill.  If the fiat currency system collapses, they will be accepted.  There will be barter and other primitive ways of dealing with each other.  Realize that if there is widespread collapse, your gold ETF will be an abstract, almost worthless thing.  If there is enough gold to fill all their orders, you will still need a functioning world to get it out.  If you buy coins or bullion, you don't have that concern.

The world currency system collapsing?  There are writers who think we are seeing the death throes of fiat currency.  Historical writers are fond of pointing out that fiat currencies always collapse because politicians and bankers just can't resist screwing with them.  It might also be the death throes of Keynesian economics that essentially asserts governments should spend more when they're out of money (in a depression, tax revenues are down just when Keynes says we should spend more).  While that will be painful, it might be like getting an antibiotic shot for a bad infection: pain now for complete cure in the long run.
Posted by SiGraybeard at 6:51 PM