Alan Shepherd convinced them to "light the candle" and rode his Freedom 7 Mercury capsule atop an IRBM into a suborbital flight.  The American space age had begun.  Good summary at the appropriately-named "Mercury News". 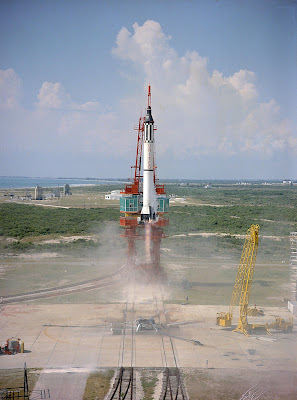 I was a snot-nosed kid (really - I had allergies) around the limits of civilization in Southwest Miami - places that are now densely populated.  Schools weren't air conditioned.  TVs were rare, and the whole school, it seems, went to the couple of rooms that had a black and white TV.  (It must have been the heroic 6th graders who had them, certainly not us lowly first graders!)  I still remember the noisy black and white images from that day, and the air of excitement that filled the country.

On July 21, Gus Grissom would ride another suborbital Mercury-Redstone flight, famously losing his spacecraft, the Liberty Bell 7, before John Glenn would become the first American to orbit the earth, riding the more powerful Atlas ICBM booster into orbit.  But the most historically important moment happened mere weeks after Alan Shepherd's flight, May 25, 1961.  John F. Kennedy announced


"I believe that this nation should commit itself to achieving the goal, before this decade is out, of landing a man on the moon and returning him safely to the earth. No single space project in this period will be more impressive to mankind, or more important for the long-range exploration of space; and none will be so difficult or expensive to accomplish."

I suppose you had to be there.  I was captivated and became a space geek kid.

As big a fan as I was - and am - of space exploration, NASA's finest days were over by about 1980.  Today, it's an arthritic bureaucracy better at preserving itself than exploring.  I don't know for sure that the future is with Spacex and not one of their competitors, but this week they took the unusual step of posting their actual costs to develop their rockets and the actual costs of their flights.  This is unheard of in that business.


The Falcon 9 launch vehicle was developed from a blank sheet to first launch in four and half years for just over $300 million. The Falcon 9 is an EELV class vehicle that generates roughly one million pounds of thrust (four times the maximum thrust of a Boeing 747) and carries more payload to orbit than a Delta IV Medium. 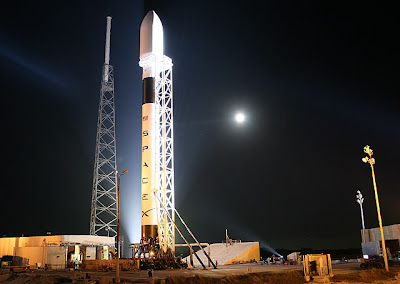 Let's get the arthritic dinosaur out of the way and let innovation flourish.
Posted by SiGraybeard at 9:49 PM