A Small, Furry Story From the Police State

I shouldn't joke about this.  Facing a $4 Million dollar fine for selling a few (dozen) bunnies is not funny and could completely ruin this family.  It's not funny.  It's just that it's at least a little better than executing them on the spot, as the police state did with Jose Guerena in Arizona the other day or Erik Scott in the Las Vegas Costco last summer, or (you can insert a list here).

The story is from Bob McCarty on BigGovernment.Com (link just above).  It begins:


...John Dollarhite and his wife Judy of tiny Nixa, Mo., have been told by the USDA that, by Monday, they must pay a fine exceeding $90,000. If they don’t pay that fine, they could face additional fines of almost $4 million. Why? Because they sold more than $500 worth of bunnies — $4,600 worth to be exact — in a single calendar year. 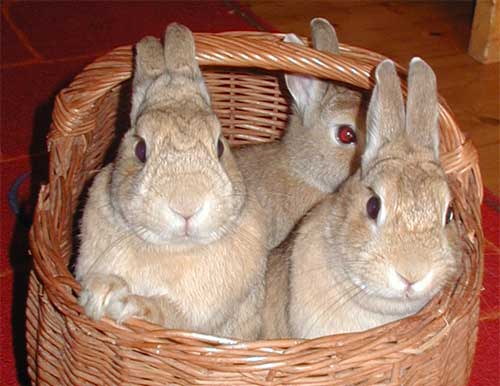 
By the year’s end, the Dollarhites had moved approximately 440 rabbits and grossed about $4,600 for a profit of approximately $200 — enough, John said, to provide the family “pocket money” to do things such as eat out at Red Lobster once in a while. That was better than the loss they experienced in 2008.

Let me get this straight: they sell 440 rabbits for $200 profit, or under 50 cents each, and somehow that warrants $1000 each in fines?  It's worth reading the whole thing.  Just another example of the worst of what this country has become.  As one commenter put it:


And this is how they do it. By going after the little guy because it's easier to go after a law abiding citizen than to go after a big factory farm with lots of money and lawyers at their disposal.

Another commenter posts the laws, passed in 1989, that stipulates selling over $500 worth of rabbits is a federal offense.   The insanity that is the police state.
Posted by SiGraybeard at 9:25 PM