Thanks to a link from Kevin at the Smallest Minority for tipping me off to the building problem with the Mississippi.  It seems we're building to the biggest flood stage since 1927, almost a century.

Did you catch the stuff about the levees being blown to save the town of Cairo, Illinois?  That's just the start.


But the real threat posed by this historic, gathering flood may well lie several hundred miles to the south, where the Mississippi crosses the Louisiana border. There, as the Corps well knows but dare not discuss, this historic flood threatens to overwhelm one of the frailest defenses industrial humanity has offered to preserve its profits from the immutable processes of nature. This flood has the potential to be a mortal blow to the economy of the United States, and outside the Corp of Engineers virtually no one knows why.

From a second source:


The river is forecast to crest at 53.5 feet on May 18 at Vicksburg, Miss., a key gauge. That is the highest river stage recorded at Vicksburg since the catastrophic flooding of 1927 when the river reached 56.6 feet and would have kept on rising if levees hadn't given way, causing massive flooding and killing hundreds. After that calamity, the nation undertook an aggressive $13 billion plan to build levees and floodways that would avert such a scale of flooding again.

Unfortunately,  those folks at Bird's Point were sold out by a law in 1928.


Yet it has always been the plan of the Corps, which bears responsibility for “managing” and “taming” the mightiest American river, to use Bird’s Point as a floodway in an emergency. The plan is sanctioned by the 1928 Flood Control Act.

So while I feel bad for those folks, I believe this would have shown up in the survey or deed search that has to be done before a mortgage is granted.  It's like building on the beach around here.  You might not get wiped out by a hurricane this year, or next year, or for as long as you want to live there.  But sooner or later it will happen.  Just a matter of time. 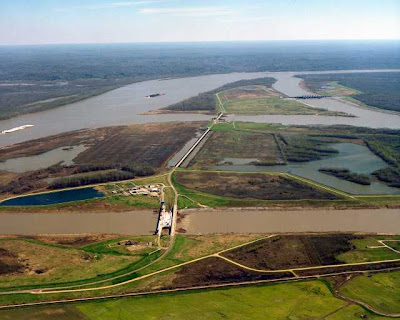 The little known Old River Control Structures (bottom center), a frail line of defense between the raging Mississippi River (top) and a total dislocation of the US economy, by way of the Atchafalaya River (bottom).
Posted by SiGraybeard at 8:58 PM