I was happy to hear that Representative Alan West, the rising star conservative from South Florida, is calling for Eric Holder's removal as Attorney General of the US. The NRA has a "fire Eric Holder petition" you may want to sign (solicitations for contributions to the NRA-ILA arriving in 3, 2, 1...)

Eric Holder is a disgrace to his office and our country.  Let me count the ways.

Fast and Furious/Gunwalker.  Although this program started under Dubya, the Obamanoids latched onto it as their own.  Expanding the operation to multiple offices of the BATFE, and the DEA, how much do you want to bet that it's government wide and every fiefdom in the DOJ is in on it?  The only explanation for this abomination that makes any sense is as a prelude to the UN treaty on small arms control to show that the Western Hemisphere is awash in American guns - so that they can disarm the population.  Does it extend past Holder?  You bet your butt.  Probably all the way to the oval office.  Perhaps if we send him to Gitmo, or better yet, one of those Saudi rendition facilities and the put him on the barbecue spit, he'll finger the rest.

The largest documented provider of illegal firearms in the western hemisphere is apparently the US Government, not American gun dealers.

The refusal of his DOJ to prosecute racial crimes, unless the victims are "his people".

His refusal to investigate ACORN, or Planned Parenthood - groups that need investigation.

Refusing to prosecute CAIR and other US groups with ties to Islamic terrorism.

Holder's gang has politicized every aspect of the DOJ down to Freedom of Information Act requests.  "According to documents I have obtained, FOIA requests from liberals or politically connected civil rights groups are often given same day turn-around by the DOJ. But requests from conservatives or Republicans face long delays, if they are fulfilled at all."

Holder's handling of the Christmas 2009 terrorist attack (the underwear bomber) where he singlehandedly decided the bomber deserved the Miranda rights of any American citizen (which he wasn't), went over the heads of every other agency in the fed.gov.  At best it's stupid; at worst it's a raw power grab over the DOD, and the rest of government.

This blatantly racist, pathetic little man, the least fit to be attorney general in at least a generation, who said "America is a nation of cowards" when it comes to race issues is a disgrace to his office and this great country.  Congress - this man needs to be arrested for malfeasance. 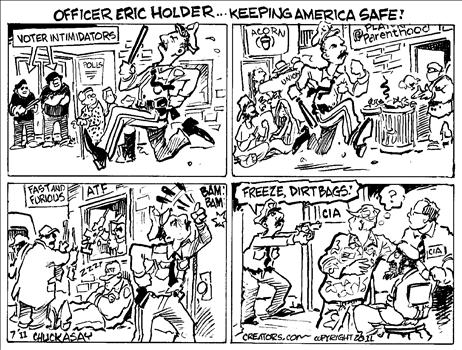 Labels: big freakin' out of control government, commies and other idiots, dumb_lawyer_stuff, politics