You Know, I'm Starting to Take This Personally

Since taking power, this administration has doggedly been trying to destroy achievers in society by punitive taxing, destroy savers by inflating the dollar to worthlessness, and they've been absolutely schizophrenic about private airplanes, first attacking private jets, then giving them depreciation breaks in the "stimulus program", and now they're attacking them again.

I can't believe that taking away accelerated appreciation on jets is going to bring in enough money to the treasury to change the picture, remember we're borrowing $4 billion per day, but the attack on small jets in 2008 caused a crash in the general aviation market that it's just now recovering from.  It also caused a lot of people I knew - good kids - to loose their jobs.  They're attacking my income, my savings and now my job.  I'm starting to think it's all because they don't like me.

Although this writer doesn't mention the people that design, build and test the aircraft and all the things that go into one, he's right in principle:


If Congress should actually change the depreciation rules for corporate jets—rules that were set by the Obama Democrats’ own 2009 stimulus package—and it had any effect at all, the costs would be borne not by clueless CEOs or other high executives, but by comparative little guys: the pilots, flight attendants, mechanics and ultimately the folks that work the assembly lines at small jet aircraft factories. That’s what happened when Democrats in 1990 thrust a big tax on yachts over a certain size. The rich people who could afford them weren’t inconvenienced, but the folks in Maine and other places who build large boats lost their jobs.  (source)

When the president and his cronies do this pseudo-populist crap they have to assume people are ignorant, can't run a calculator and just want to resent other people.  All of their policies are based on class envy.

Let's go back over the numbers for the bazillionth time.  They keep saying by raising rates on the "evil rich bastards that make over $250,000 per year" they're going to raise $700 billion in revenue.  That's a lie.  That number is for 10 years: for the first year, it's going to be $30 billion.  That's not even one week worth of borrowing out of the year.  The numbers are in a Geithner quote here.  Yeah, it's old, and yeah, it's from the time when they were first arguing about leaving tax rates where they are:  the situation hasn't changed.  Hauser's Law has not been revoked. 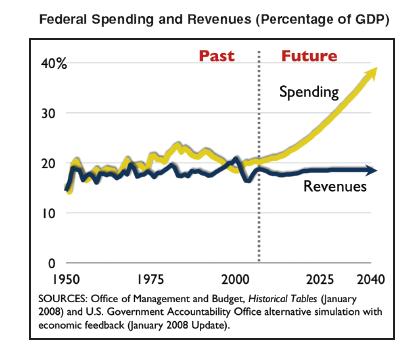 I've said so many times I'm sick of it, but It's the Spending, Stupid. (that goes back to September of 2010). There is no way out of this but cutting spending beyond a balanced budget and running surpluses as far as the eye can see.

But look at it this way:  a Keynesian stimulus spending program can not possibly work.  It's mathematically impossible to grow the economy that way.  The quantity of wealth is not changed.  It's like taking water from the deep end of the pool and throwing it into the shallow end to raise the entire pool level.   They take money from people who would spend it on what they want and give it to other people who spend it somewhere else.  All they've done is change the business that handles the transaction - and bought the vote of the money recipient, the whole point of this exercise.
Posted by SiGraybeard at 10:23 PM