I don't know about you, but I grew up reading science fiction, and every story worth a darn had robots.  I remember devouring "I Robot" by Issac Asimov, and all of his robot stories; I ate that stuff up.  By this time, I figured we would all have cool robots as our personal tools.  They'd do the dirty and disgusting jobs for us, and allow us to enjoy more leisure.

It's no secret that robots are here and they are doing a lot of work.  Humans and robots have been working alongside for over 35 years.  The speculation has gone from intelligent machines (Ray Kurzweil in the 80s) to spiritual machines (Kurzweil in the last decade).  The first human to be killed by a robot, Robert Williams, was decades ago - in 1979.  Obviously that whole "Three Laws of Robotics" thing is a ways off. It's fine to say "A robot shall not harm a human or by inaction, allow harm to come to a human", but the sophistication to decide what's human and what isn't human would choke the biggest computers on earth today.

Allow me to introduce Heather Knight, Ph.D. student and owner of the (fantastically named) company, Marilyn Monrobot.  Engineering magazine Design News had an article on her work that drew my attention to it.  Her interests are in making robots "live" better with humans.  Making them "Devilishly Charming Robots and Charismatic Machines."  Robotics researchers talk of something called "the uncanny valley":


Part of her mission is to address the so-called "uncanny valley" -- a moniker used by roboticists to describe the phenomenon wherein humanoid robots give the creeps to real humans (which most of you probably are).

There's a fine line between making robots that move with us, fit in with us in our homes, but that don't creep us out.  I have seen some anthropomorphic robots that do creep me out a bit. 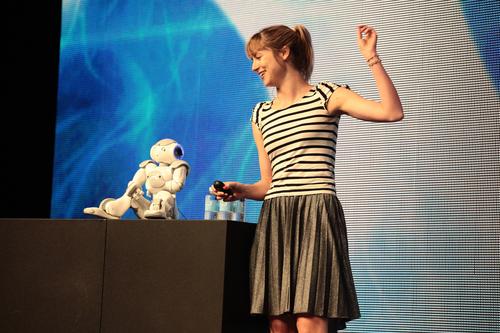 Her approach is get the robot to do stand up comedy!  (No, seriously - a robot walks into a bar...)  The robot learns from audience reactions and continually adjusts its routines.  Enjoy this six minute video of the world's first performance of a robot doing stand-up.