More Tales From The Over Regulated State - A Series

Do you take vitamins?  Do you take glucosamine for that arthritic knee or peppermint for an upset stomach?  Do you take cranberry for a urinary tract infection or St. John's Wort to help even your moods?

You may not be able to take any of that much longer.

The Food and Drug Administration issued a ruling on July 1st - not just a Friday bomb, a Friday-of-a-holiday-weekend bomb, that ought to pretty much destroy the supplement industry and bankrupt every company in the business.   You can read the whole order at the FDA's web page, or read summaries like this one in the Natural News.  I don't read Natural News all the time, but I have found them to be accurate in what they report.  Their coverage of the awful Food Safety Act at the center of this was right on target.

How does this FDA ruling and the Food Safety Act tie together?:


Back in 1994, when the FDA’s war on the nutritional supplement industry was going full force, Congress responded to public pressure by passing the Dietary Supplemental Health and Education Act. This law was designed to get the FDA off of the backs of the nutritional supplement industry, but it did contain a provision that required supplement manufacturers to notify the FDA whenever they added a new ingredient to an existing supplement or created a whole new product out of these new ingredients.

Probably because this provision seemed toothless from the perspective of the FDA, they basically ignored it for 17 years. When Congress passed the Food Safety Bill in 2010, however, this new law mandated the FDA to finally set written standards for NDI (New Dietary Ingredient) notifications. Given its apparent indifference up to this point, one might have expected the FDA to do little

Not so fast, there, proletariat scum.  Our insect overlords know better:


Actually eschewing the concept of simple notification, this front organization for the drug companies is now going to require the sellers and manufacturers of supplements to submit NDI detailed reports on every single ingredient they have added to any of their products since 1994. These reports are supposed to include “proof” of the effectiveness of these ingredients in the form of peer-reviewed articles published in scientific journals and results from clinical test trials. After reviewing this evidence, the FDA will decide whether or not to approve these ingredients for sale to the public. Until that approval comes through, sellers and manufacturers of nutritional and dietary supplements will be required to cease and desist from offering their products for sale to the public.

And here's where supplements are outlawed.  As, I think, everyone who uses them knows, there are very few supplements that have scientific studies that "prove" them effective.  With thousands of herbs containing thousands of compounds, put together in millions of combinations, it just isn't possible to test every combination.

As I frequently say, don't worry it's not that bad: it's worse.  Any change to a supplement that has been on the market since 1994, any change, requires this NDI reporting process, which requires the product be removed from interstate sale for 75 days.  So if a company was offering a vitamin that had 300 mg of Vitamin C and they increase it to 350 mg, they need to file an NDI form and are forbidden from offering the supplement for sale, under penalty of SWAT team assassination.


The requirements for "proving" the safety and efficacy of dietary ingredients is entirely unreasonable. FDA says it requires companies to submit peer-reviewed scientific journal articles, clinical trial test results and even, in the case of botanicals, to provide the name of the scientist who originally gave the plant its Latin name. (Seriously? Is it a trick question?)

From "Off The Grid News" again,

For those who would argue that the FDA is taking this action simply because it wants to protect the public from unscrupulous operators who want to exploit people’s interest in natural remedies, there are two aspects of this new policy that prove conclusively what the FDA’s agenda really is. First, the requirement that nutritional manufacturers prove the safety of the ingredients they sell actually applies to companies, not ingredients. What does this mean? Simply this – if Company A and Company B both use the same new ingredient in their products, it will not be enough for Company A to submit evidence proving conclusively that this ingredient is safe and effective. Even if Company A gains approval for one of their supplements (fat chance, but for the moment let’s pretend), Company B will still have to apply for an NDI permit for the same ingredient – and they will have to present separate evidence to prove its safety and efficacy! This shows clearly that the point of these regulations is to cause hardship for nutritional companies, not to protect the safety of the public (emphasis added -GB)

and back to "Natural News"

The real kicker in all this? Synthetic molecules that mimic dietary supplements (i.e. those used in pharmaceuticals) are EXEMPTED from all these requirements! So synthetic molecules need no approval from the FDA, while the natural ones do! This conveniently exempts the pharmaceutical vitamin companies who use synthetic vitamin chemicals rather than natural, full-spectrum nutrients. (emphasis in original)

The FDA is one of those offices that was useful at one time, but has fallen into the control of business.  Time to shutter them until they can be deloused.  While I detest the term "Big Pharma" as much as I do "Big Oil" or "Big Agra", the merger of government and business is the worst of all possible worlds.  In this case, it sure looks like the pharmaceutical companies are eliminating all possible competition. 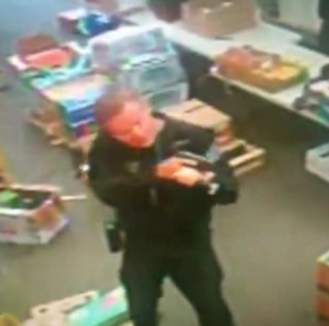 Police during a raid on a California natural food store, for selling raw milk.  At least he isn't wearing a black mask.

Someone once joked that they thought all those herbal formulas were just lawn clippings stuck in a gelatin capsule, and I've to admit I've had that concern when I took some.  But the choice of the consumer to take those things ought to be their choice alone.  The role of the FDA, if any, should be to ensure that the capsules labeled "St. John's Wort" were really that and not "St. Augustine lawn clippings".