Today, we said goodbye to Shuttle launches, with the launch of the final Space Shuttle, Space Transportation System 135.  It was way too cloudy to see from home, so I'll have to content myself with memories of watching almost all of them.  I stood outside (while the DVR was recording) until I could hear the rumble.  The clouds muffle the sound, too. 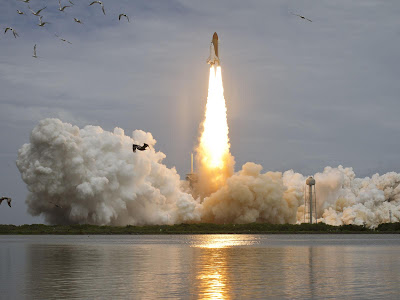 I've written on this subject as the year has gone by.  I know that NASA is an arthritic bureaucracy, barely able to do this.  I know the vehicle was designed in the 1970s, intended for something around a 20 year lifetime, and it's time to hang it up.  I know the program was over hyped and it never achieved the costs to orbit, or the launch frequency, or the operational safety it was sold with.  I know that the most bang per buck has come from unmanned, probes.  But as Tam said earlier today,


If you're going to steal money from me at gunpoint, promise me you'll use it to do cool stuff like shake the ground with thunder and punch holes through the sky.

While I've seen almost every shuttle launch, I was actually only on the Cape for one, a night launch (STS-61) two flights before Challenger was destroyed (no I didn't remember the mission number - had to look it up).  There is really nothing like the spectacle of a night launch on the Cape, as the area lights up in a false dawn.  In the man made daylight, you can see the pressure wave of sound approaching over the waters of the Banana river.  When the sound reaches you from that four miles away, you feel it deep inside, resonating in your chest.  I was wearing loose slacks, and I could feel my pants legs moving in the infrasonic waves.  When Mrs. Graybeard worked on the Cape, they had a place to watch launches that was technically inside the fall-back zone, where the pressure wave can hurt you if Really Bad Thing happens.

I know it's time to put the program away, but I know people who are being laid off, or living in fear of it.  I feel bad for what's coming for them.  NASA, of course, contracts out virtually everything, so my friends work for Boeing, United Space Alliance, and other contractors.  Many have worked most of the last 20 or more years up there, and a few are probably going to retire.  I know NASA must be cut like I know every government agency and program must be cut dramatically, but I hurt for all of those people.  Yeah, I know; I'm too soft.

It's no secret - chances are everyone who visits here knows the Endarkenment approaches.  I know as well as anyone that the economy is on the verge of collapse, and the social order on the verge of disintegration.  Knowing it's coming doesn't make seeing it any easier, and like some of the other folks I read, it pains me.  The end of American manned space flight just seems like another sign of the approaching darkness. 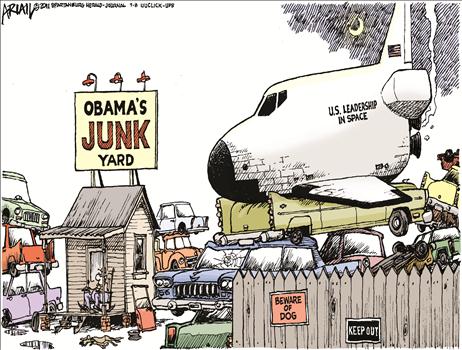 credit
Posted by SiGraybeard at 8:10 PM