I've been really bad about pointing out blogroll changes and other administrivia that goes on around here.  So let me do a bit of that now.

First, I have added links to Slogging Toward Liberty, an interesting blog by an interesting guy (known to my regular readers) who profiles himself as "Former LEO, current RN, Rotorcraft rated, Heinleinian non-specialist. A "grouchy old cripple" who "prefers the tempestuous sea of liberty to the calm of despotism."".  Next, most readers know Kerodin from his two blogs Momento Mori and III Percent Patriots where he regularly distills down ideas and events to smaller nuggets than I do.  He says, "This website is the Official home for the III Percent 527 Issue Advocacy Group, dedicated to promoting III values within the political realm. ... We do not claim to speak for the entire III Movement. "

My Gun Culture was another recent addition, because I value humor.  With the world as it is, we can always use some more humor.

I decided to add a breakout for some other blogs I read from time to time, with the common thread that these are all fellow Florida gun blogs.  These are folks way more widely known than I am; Robb Allen at Sharp as a Marble,  Gun Free Zone, the political organization pushing for Open Carry in the state, Florida Carry, and Jon Gutmacher, whose book on Florida Gun Law is considered required reading.

And, although I don't make it as much as I thought I would, I consider this a gun and gun rights blog, too.

I always reciprocal link, and I think I've got links back to sites that link to me.  If I missed it and you want to be included, just let me know.

Finally, is anyone else watching Falling Skies, the post-alien invasion apocalypse show on TNT?  It's on too late for me, since it's over at 11PM eastern and work days start at 6, but we DVR it on Sunday night and watch it... now.  I'm not convinced it's a great show, but it's not a bad show, and how can you go wrong with 6 legged aliens called "Skitters" that communicate by radio telepathy, kidnap kids and put a Puppetmasters-like harness on them to control their every move, and that control giant two-legged kill-bots?  Further, I see they've picked it up for a second season, unlike V, and Jericho, two other shows I started to like. 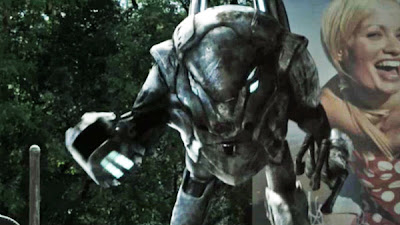 A "Mech" - the giant kill-bot from Falling Skies.
Posted by SiGraybeard at 9:08 PM