I spent today catching up on some things I wanted to do on the holiday weekend.  It seems I never get everything done I want to do on any holiday, but I mixed this "work" with some goofing off and sleeping late, so I can live with not getting everything done.

One of the things I wanted to do was take a look at a pair of cheapo iPhone chargers that have died on me.  Has everyone seen Dilbert's take?

As always, Dilbert is pretty much a documentary.  Both of these chargers plug into the car's 12V system (which is nominally 13.6V) and convert it to 5V DC at 1A - the USB charging "standard".  Both of them died while in my car, keeping my iPhone 4s topped up on the 3 hour trip over the river and through the woods to grandmother's house.  (I was using streaming radio, so the phone by itself may not last that long on its batteries).  Both died about halfway.  Not even two hours of operation.  Both gave off a tell-tale smell that all technicians know - burnt electronics.

Since we're talking about fixing things, I thought I'd share a look inside them.  They are typical of the unrepairable items you're surrounded by.  They are similar in design and use a single integrated power supply controller circuit.  Here's the iCrap charger with an obvious indication of being blown: 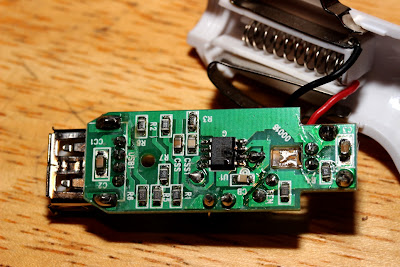 and here's a close up of the blown component: 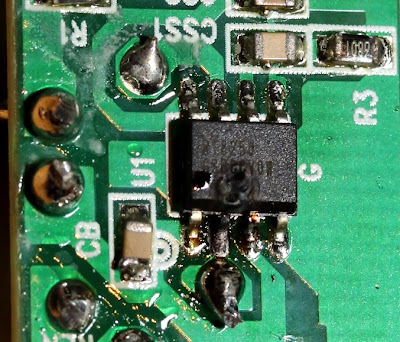 Yes, that's a seriously overheated spot on the side of the IC. Pretty foregone conclusion that the part is toast.

And that's the problem.  If the system is down, that's unrepairable.  If the infrastructure is still in place, I might be able to buy one of those parts.  Yeah, I'm guessing it would still be cheaper to buy a new charger.  If this design was made with discrete transistors, or older technology that's more widely available than these one-chip wonders, it would be easier to fix.  But then it would be more expensive to produce, and would be harder to fit in the nice little lighter plug package it's in.  They don't use these parts to be perverse, they do it to hit a price point people like.

In this magnified view, you can read the part number for the IC: it's RT8250.  I've never heard of a company that uses RT in its numbers, but searching the web for that part number brings me to a free archive of datasheets and I have the datasheet downloaded.  Turns out RT is "Richtek Technology Corporation" - whoever that is.  Likewise, the other one was an RT part, and RT34063A.  The second one uses fewer parts but is otherwise very similar.

Unrepairable?  How much of a scrounger are you?  While I couldn't make this work with the existing design, I could put in a different regulator and take advantage of the form factor that includes the USB plug and car lighter plug.  At this point, I'm probably just going to toss them , but it is worth thinking about what to do if there are no cheap/widely available replacements and how I'd generate something to do the same function.