If you haven't read it, Fred Reed (Fred on Everything) ventures afield from his usual topics into trying to make sense of evolution vs. intelligent design in an essay he calls The Bugs in Darwin (h/t to DumpDC).  It's long, for which Fred apologizes, but strikes me as the highlight of the weekend on the various blogs.  As usual, I give you a teaser.  Go read the whole thing:

If you look at evolution from other than the perspective of an ideological warrior who believes that he is saving the world from the claws of snake-handling primitive Christians in North Carolina, difficulties arise. Chief among these is the sheer complexity of things. Living organisms are just too complicated to have come about by accident. This, it seems to me, is apparent to, though not provable by, anyone with an open mind.

Read a textbook of embryology. You start with a barely-visible zygote which, (we are told) guided by nothing but the laws of chemistry, unerringly reacts with ambient chemicals to build, over nine months, an incomprehensibly complex thing we call “a baby.” Cells migrate here, migrate there, modify themselves or are modified to form multitudinous organs, each of them phenomenally complex, all of this happening chemically and flawlessly. We are accustomed to this, and so think it makes sense. The usual always seems reasonable. I don´t think it is. It simply isn´t possible, being a wild frontal assault on Murphy´s Law.

Unless Something Else is involved. I do not know what.

As a Bible reading believer, I think I can answer the "what" question, but I'm happy to see Fred questioning everything.  Questioning is the beginning of wisdom.  Fred links to a book called "Darwin's Black Box: The Biochemical Challenge to Evolution", on National Review's list of the 100 most important nonfiction books of the twentieth century, and includes some great things to ponder the complexity of.

I've written about this topic before, because I believe the complexity of life precludes a Darwinian explanation of how we got here.  I'm not saying Intelligent Design is a provable scientific principle, I'm saying Darwinian evolution is not a provable scientific principle either.  Neither one is what I consider to be hard science.  What experiment could you conduct that would start with pure, inanimate chemicals and end up with Venus flytraps and penguins (flightless waterfowl)?  When a look at any one of literally thousands of known biological systems shows a system that simply could not have evolved through competition of millions of single point mutations, or one that had to spring up at its full level of complexity, the gradualism of Darwinian evolution breaks down.   (Punctuated equilibrium theories don't get you out of the mess, either because they depend on gradual evolution as well) 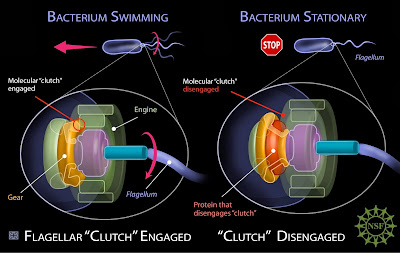 The bacterial flagellum, simplified view.  The similarity to an electric motor is so strong, some writers even call it a motor, complete with rotor and stator.  And apparently a clutch.  Can you imagine this system working with a hodgepodge of assembly methods and parts in a hundred different orientations?  Would a non-working flagellum provide survival advantage so that the right one could evolve?  National Science Foundation picture.