So Why Should I Believe You Now?

This week the FDA announced that trans-fats are to be removed from the American food supply, by taking them off the GRAS list - Generally Recognized As Safe.  Interestingly, some of the most "heart-safe" recommended foods, like margarine and artificial coffee creamer, at the ones to be banned.

So last Saturday they were safe and this Saturday they're poison?  You were wrong last week?  So why should I believe you're right now?

In the case of Trans fats, I've been convinced they're something to be avoided since about 1997, but that's not the point.  I could be wrong in choosing what I decide to eat, and hurt nobody but myself.  They decide and hurt hundreds of millions.  I started leaning this way after reading "The Oiling of America" back then combined with data coming out of the Harvard Nurse's and Physician's Studies around the same time.  (BTW, I'm not sure of the web site and I'm a bit skeptical of the coconut oil industry, but they feature this piece and came up high in Bing. )

So where does the GRAS list come from?  Same place "My Plate" or food pyramid comes from.  They tell you it's Science!! but it's more like politics and influence peddling.

The FDA needs to be cut back in size by about 2/3 to 3/4.  Considering how badly their vaunted protection of the food and supply has screwed up and killed Americans (one example), it's not like they're doing much protection anyway.

General rule in life: if the Fed.gov recommends anything, they're probably wrong. 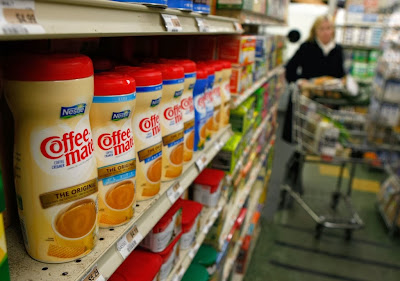 (This wretched stuff goes away, and good riddance.  I prefer heavy cream.)