I've been working on my G0704 CNC Conversion project as time allows on weekends.  Today, I wrapped up the last of the lathe work - I think.  Four more threaded spacers, 1.5" and 10-32 threaded both ends, and then a couple of shaft collars.  Along the way, I got quite a bit more efficient at making these.  The first ones took a long time.  The last four took a few minutes each. 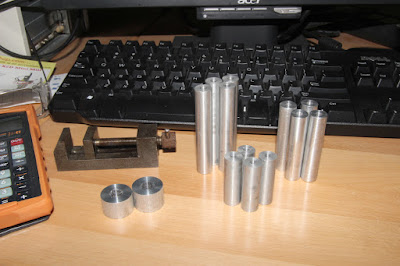 I should probably powder coat those, or some other sort of finish, but not right now.

The next phase is to make the motor brackets.  I plan to make those on my CNC Sherline, which requires I create instructions to make the part; numerically described tool paths called G-Code.   This is a standardized language (RS-274), although not every system has to recognize all of the possible codes.  G-Code can often be generated by hand with a dimensioned drawing, but complex shapes (for example, carving wax for jewelry casting) require another software package to take a 3D model and convert it to tool paths.  This is called a Computer Aided Manufacturing, or CAM, program.  If a CAM program is required, the first step is to draw them in 3D Design Software.

It has been a while since I've looked to see what software is out there, but the program I use is Rhinooceros, usually called Rhino3D.  If you're not familiar with this world, it's got quite a learning curve.  Rhino is considered a modelling program rather than a true Computer Aided Design (CAD) program.  The differences are kinda subtle, but while Rhino can give you dimensions of anything you draw, and allow you to do things like rotate something to make sure it clears some other part of your design, it takes a bit more manual effort than a true CAD program.  While Rhino probably comes across as pricey, it's around what a mid/high end production pistol costs (my current "object du lust"), the true CAD programs cost quite a bit more, like 30-40 times that.

The advantage of using CNC for this is that it will make doing anything other than drilling or boring holes easier.  I'm not doing this because I intend to make lots of these, just to make my work at the milling machine easier.  The work shifts from cutting metal to moving traces on this screen or deriving XYZ coordinates for where cuts have to happen, or where holes have to be drilled.