This week my shop time has focused on a few of the small parts I'm working through.  Pictured here, the part on the right is the cam for the engine and the smaller one on the right is called the cam roller. 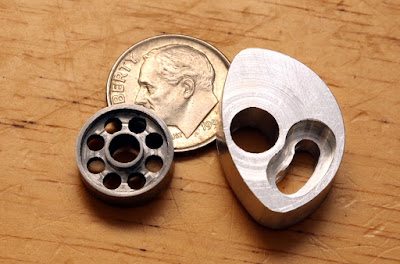 Each one had its own puzzles to overcome.  The major one on the cam was that large radius cut on the left.  When I first bought the book these plans are in, I thought that if I brought it out to the shop those glossy pages would eventually get grease and oil stains on them and might make it unreadable, so I decided to photocopy every page and print them out.  Out of the 18 pages, only one page shifted enough on the copier that not every word made it to the copy, and only about one sentence was fully cut off.  And that sentence had a couple of words that were critical to cutting that part.

Murphy's Law is as much a part of the fabric of the universe as Newton's or Faraday's.

Since I had the book, it was easy enough to read the missing sentence.  The trick to cutting this part is to cut it on the rotary table in two separate steps.  First, the table is centered so that its axis is directly under the spindle.  Next, the table is displaced to one side (pure X or Y axis motion) exactly 9/16".  Let's say I displaced the table to the right.  Next, I put a vise on the table, with the rough shaped cam clamped in the vise (the cam is now just a 15/16" diameter round part with a 1/4" hole down its center).  The vise is then moved around to center that hole under the spindle so rotating the table rotates the part around a point to the right of its edge.  Now the table is moved farther to the right so that the cutter just touches at the left edge of the cam and the cam is trimmed back until that shape is obtained.  Mostly.  The rounded upper and lower edges are sharp when the machining is done.  The roughly 3/16" radius each corner has was done by hand/eye with sandpaper.  Found a washer with a hole that matched and used it as a circle template to draw a curve on the points then sanded to match on my el cheapo Horrible Freight sander. 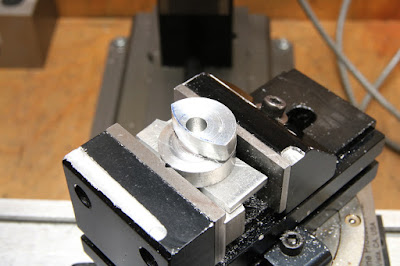 The cam roller was rough cut to shape and drilled on axis on the lathe and then the lathe chuck moved to the rotary table on the mill to drill the holes and cut the web between the hub and outer rims.  In theory, all I needed to do was set the rotary table back to its original zero (before the 9/16" move) and the table should have been centered.  It was!  That web starts out 3/16" thick and 1/16 is taken off of both sides with a 1/8" diameter end mill. 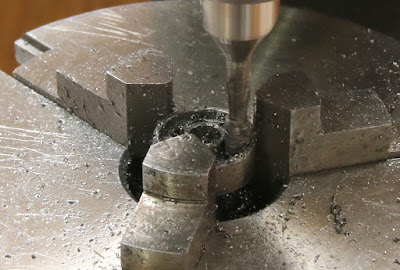 There are a few parts left on my page'o fiddly bits; two are custom made screws with 40 pitch threads; one is an intricate little screw with about 5 turns of 4-40 threads that goes through this cam roller and the other is a long push rod for the valve (pictured here) that gets threaded 5-40.  Unless I decide to make it 4-40 also.  I mean, making it #5 instead of #4 makes me need to buy two 5-40 nuts for no other reason while I have some spare 4-40 nuts in my parts bin.

Duclos makes an alcohol lamp for the engine out of a door knob.  I have a glass alcohol lamp that'll be what I use.  At least at first.