The President, the Federal Reserve, and Raising Interest Rates

For the entire life of this blog, which goes back to the second year of the Obamanation, I've been hammering on the Fed and their monetary policies.  The Federal Reserve Bank and all central banks are the worst bit of central planning that the entire world has fallen for and I believe they're not just unnecessary they're damaging.  The only things they add to the financial world are all the things wrong with the financial world: destructive levels of debt, countries engaged in constant currency manipulations to try to get an advantage over each other, the creation of money out of nothing, money as debt rather than asset, the destruction of the information channel in monetary transactions.   Everything that's wrong with the world's economies goes back to central banks.

If you don't see what I'm saying, I can't summarize much more here.  Just use the search bar in the upper left and search on terms like Ben Bernanke, or "Bernank" as I often called him, Janet Yellen, quantitative easing (QE), interest rates, the Fed, or any other related term.  Or just go to the bottom of the right column where the list of labels appears, click on Economics and get all 458 posts so far.  Be prepared to spend days.

So where am I going tonight?  You might have heard that president Trump criticized the Fed for raising interest rates.  He says the Fed is working at cross purposes to his economic program.


In an interview published on CNBC, Trump said he wasn’t thrilled with the Fed’s rate hikes — despite calling Jerome Powell, whom he picked to replace Janet Yellen, a “good man” — and said he didn’t care that he was breaking a precedent under which presidents do not comment on the Fed so as to safeguard its independence.

“So somebody would say, ‘Oh, maybe you shouldn’t say that as president. I couldn’t care less what they say, because my views haven’t changed,” Trump said.

The media, predictably, is getting the story completely wrong, focusing on Trump's statement being political pressure on the Fed.  Fed head Powell has said he’s not concerned about political pressure from the administration. Instead, Powell responded with this knee-slapper:


In an interview with the public-radio program “Marketplace,” Powell said “the Fed has a long tradition of conducting policy independent of all political concerns.”

The Fed is “independent of all political concerns”?  Don't make me laugh.  Central banking is inherently a centrally controlled economy (by controlling what's arguably the most important information in the economy: the cost of money) and that's essentially leftist.  Everything they do is big government control.  They may think they're independent, but they inevitably help any president who's in office when the economy goes into downturn with their interventions to end the downturn, and hurt any president who's in office when the economy is booming with their interventions to slow down the growth.  Their enabling of deficit spending helps all elected officials over the unelected.  Just as now their fear of Trump's tax cuts "overheating the economy" is inherently biased against his free market-based solutions and toward central control of money.

After the '08 crash, the Fed created trillions of dollars in an attempt to stimulate spending.  Other central banks around the world did the same, with smaller totals in dollars.  The fact that it took the economy almost eight years to recover leaves us to speculate if they really helped or hurt.  Perhaps they just lined the pockets of a few well-connected bankers.  The problem with all those trillions out in the world is that they don't have to be stuck in bank vaults; they can be spent and that will tend to devalue those dollars; that is, cause inflation.   I've been advocating for the Fed raising interest rates back closer to normal, historical means for years.  That will impact government spending as the amount spent on interest returns to historical averages, percentage-wise.  It leaves less to spend on other programs.

Yes, Mr. President, the Fed is at cross purposes to your programs.  Quite frankly, they think they know better than you.  For some reason, probably the inflation of the 70s which followed the final elimination of the gold standard, the Fed seems to fear middle class wages going up more than any other indication they look at.  You ran for office saying that middle class working families haven't had an increase in standard of living in decades; the Federal reserve is the reason behind that.  Whenever wages go up, they raise interest rates to slow down spending.  With less spending, some jobs go away and there's less wage pressure.

It would take enormously bold leadership, but hobbling the Fed's powers would help the nation.  During the transition, Trump advisor Dr. Judy Shelton was advocating we provide something like the Treasury Inflation Protected Security (TIPS) bonds which would be redeemable in either dollars or gold, effectively tying the two together without a formal gold standard.  That would be a good start.  This idea was actually first floated by Alan Greenspan in 1981!

It's also true as you say, Mr. President that other countries manipulate their currencies to try to get advantage over us (and others).  As Dr. Shelton also pointed out,  the proper monetary foundation for genuinely free trade has to be stable exchange rates. That way nobody can manipulate currency to get an advantage.  That means that we couldn't manipulate our exchange rates, and I believe the Fed's machinations are manipulating our currency.

There's a saying that "if you're going to dream, dream big" and that would be "End the Fed".  That would take a far more work, and if you think the intelligence services know how to screw over anyone that messes with them, imagine the Fed trying to demonstrate how important they are. 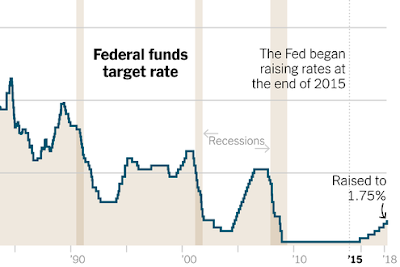 Overview of the Federal funds target rate, through this March.  NY Times graphic.  What stands out to me is the over 30 year downward trend in the interest rate, and the prolonged period at essentially 0% (the notorious ZIRP - Zero Interest Rate Policy).