A couple of weeks ago, a friend called me up about a puzzle he had.  He's a disabled Navy Vet who has a hard time getting around but his only daughter lives far away so he has no family in town to rely on.  I've taken him to the VA hospital in Orlando a couple of times.  That aside, his puzzle is that he has taken up sign making in wood with a router and templates.  I think he's using something similar to this kit from Rockler.  His problem concerned the back side of the sign and how to hang it on the wall.  Turns out Rockler sells a handy template kit for that problem and he bought that one, too. 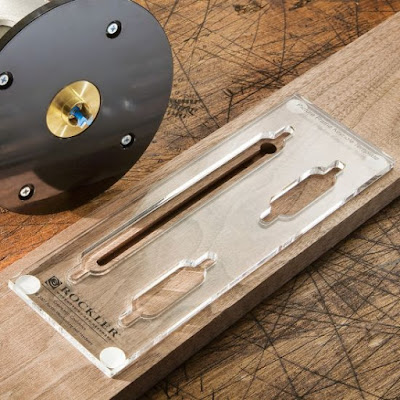 His problem was that of the three places to rout a hanging slot, he used only a short one and the setup time was lots longer than cutting the router pass.  He said five minutes to make the setup and a few seconds to make the cut.  He wanted to know if I could see a better way.

I gathered that how he located the slot was by lining the top edge of the template with the top edge of his board and the long edge (on the right in that photo) over the edge of the board.  Then, while holding the template down on the board, he taped it down to keep it from moving.  I suggested I make something like the Rockler template but which had vertical straight edges on the sides and he could pull it into place in the corner.  I'd make a pair of templates, one for the left and right corners.  As a guide, I sketched up the left corner template in CAD and sent it over to him. 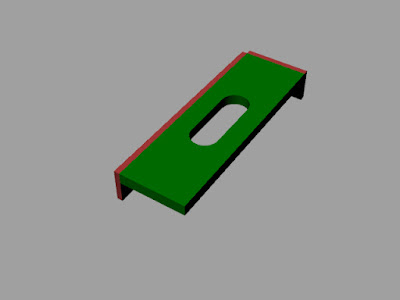 I could hear the answer without the phone and he lives about a mile away.  So into the shop.  All the measurements came from taking his Rockler template for the slot and the slot's position with respect to the edges. I made two identical pieces of quarter inch thick aluminum for the templates and identical pieces of 1/8" aluminum for the edges.  The two quarter inch pieces were clamped together for all the operations so that the sizes came out the same and the position of the slot in the center were cut in one pass.  Top and side vertical pieces are held by two 6-32 machine screws each. 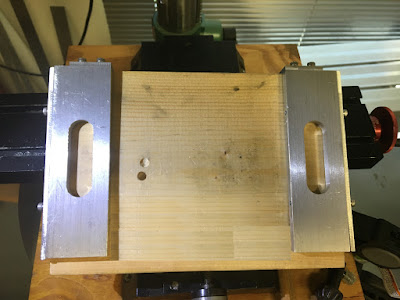 To use, they're slapped down onto the board, the right angle edges find and hold the board's corner in a second.  He says he holds them down with painters tape to make the cut.  Dropped the time to make his slot to small fraction of what it was.

My friend is apparently getting a little business going making wooden signs.  He's asked me for fixture ideas a couple of times since then.  While none of it was in mechanical manufacturing, 40 years in the manufacturing industry has left its mark on me and I've passed on ideas about fixturing to make jobs less fussy.

Meanwhile, I continue down the road of making my CNC lathe ready to thread.  My optical sensor board is here.  I found the part number and looked up the data sheet to get the part dimensions.  Modeled the part and a way of using it on the Sherline.  (I didn't do the model of the Sherline lathe itself. Just the parts in green and turquoise) 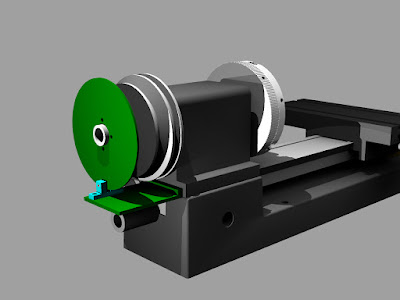 Work never goes as quickly as I'd like, but it's moving along.