I missed the 60th anniversary of the first X-15 flight on September 17, 1959 thanks to my sources being late on it.  On that day, pilot Scott Crossfield made the first powered flight of the rocket-powered X-15 aircraft, taking it up to 52,000 feet.  The X-15 would go on to fly into space more than a dozen times.  It wasn't the first rocket plane and it wasn't the last, but it was a remarkable test platform for learning more about space, getting sensors working, figuring out reentry, and more.  More than half a century later, the exceptional plane still holds the world record for speed by a piloted, powered aircraft after William Knight flew the vehicle at Mach 6.70 in 1967. 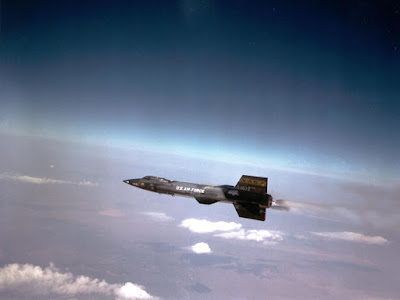 The X-15 had an exclusive group of pilots, but it only numbers a dozen.  Neil Armstrong flew seven X-15 missions between 1960 and 1962 before going to NASA.  Another astronaut, Joe Engle is the last surviving X-15 pilot.  Ars Technica posts a long interview with Joe about flying the X-15, "What it was like to fly the baddest airplane the world has ever known."  Engle says, “The X-15 was the most demanding airplane I’ve ever flown."


On the night before a flight, technicians would mate the X-15 to the B-52 aircraft, pressurizing the plane’s fuel tanks and preparing it for flight. As the pilot, Engle would arrive shortly after sunrise to don a pressure suit and ensure the integrity of its seals. About 45 minutes before the carrier aircraft took off, he would climb into the X-15 cockpit and connect to life support.

Then, the wheels would roll, and the B-52 would take off for its bumpy ride up to the launch location and an altitude of 13.7km. This would take a little more than an hour, during which time Engle would continue to review his cue cards. In particular, he would memorize the various dry lake beds he could make for, were there an engine failure aboard the X-15, based on how many seconds the engine had burned before failing. During the rare moments of reflection at this time, he doesn’t recall being nervous. Rather, he said, “You’re thrilled to death to have the opportunity to be there.”

At the drop-off point, Engle would hit the launch button to release the X-15 from its carrier aircraft. As soon as the rocket plane was clear of the B-52, the pilot would grab the throttle as quickly as possible to open the propellant lines.

The liquid-fueled XLR99-RM-2 rocket engine, built by Reaction Motors, had 70,400 pounds of thrust. This was a powerful engine six decades ago, and even today it has about two-thirds of the thrust that Blue Origin’s New Shepard rocket uses to send a six-person capsule into space.

The X-15 weighed about 30,000 pounds fully fueled and loaded, so feeling over twice its weight in thrust and about 2Gs pushing you into the seat left no doubt that the engine had started.  Still, Engle says it didn’t keep you from reaching up and turning off switches, or maneuvering the airplane with the stick.  As the fuel burned for the next roughly 90 seconds, and the vehicle lost that fuel weight, the G forces increased to closer to 4Gs making it harder to reach the panel.


This initial part of the flight required absolute attention, because any course corrections had to be made early, before the X-15 climbed out of the lower atmosphere. Once on a ballistic trajectory, there wasn’t much that could be done to alter the flight.

For high-altitude flights, the X-15 would have about two to four minutes above the bulk of the Earth’s atmosphere in space. “The first time, I naively thought there would be a lot of time,” Engle said. “I thought I would be enjoying the view out the window.” But reaching space brought a new series of tests. Guidance and navigation engineers wanted ultraviolet and infrared sensors on the plane to gather data about the atmosphere, so the X-15 needed to be rolled 90 degrees one way, back to zero pitch, and then rolled 90 degrees in the opposite direction to sweep the instruments over the horizon at different Sun angles. Some of this data was used to better control the flight of intercontinental ballistic missiles.
...
“The X-15 was the most demanding airplane I’ve ever flown, and also the most rewarding airplane I’ve ever flown,” Engle said. “You’d work your tail off during that 10 minute flight. You’d be covered in sweat. But once it stopped, you really felt like you’d accomplished something, like you’d scored a goal with a USA uniform on at the Olympics.”

The article is definitely worth your time to read.  It's more about Joe Engle and his life than just about the X-15.  After his first flight in 1963, Engle would go on to fly a total of 16 missions over the course of two years, reaching a maximum of 85.5km, above the US Air Force’s threshold to be considered an “astronaut.” He also achieved a top velocity of Mach 5.71.

After those two years, Engle applied to NASA to be an Apollo astronaut, but it was not to be.  Deke Slayton, who appointed crews for the Apollo missions, assigned Engle to be the Lunar Module pilot for the final mission, Apollo 17.  That was overruled by NASA management, who instead wanted geologist Harrison Schmidt on the mission.


“It was very disappointing,” he said. “I was crushed to learn that. However, going to the Moon was really all about geology. Learning where the Moon came from, and about the craters there. Jack Schmitt had a degree in field geology. To me, it just made sense that he should be on the Moon picking up rocks. So I understood the decision, even if it wasn’t my idea.”

For accepting being dropped well, "being a team player", Engle was given his choice of next mission: would he go for likely orbital Apollo mission or hold out for the eventual Space Shuttles?  He chose the latter and ended up commanding the second spaceflight of shuttle Columbia, in 1981, as well as another mission in 1985. 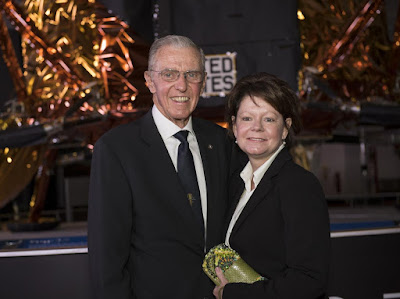 Joe Engle at a screening of the Neil Armstrong biopic, "First Man", at the National Air and Space Museum in October 2018.  NASA Photo.