First, a few definitions.  A mild hybrid, as opposed to full hybrid, is one that uses either a smaller electric motor, or uses it for a smaller portion of the car's power.   A supercapacitor is a capacitor with exceptionally large capacity.  The capacitors you usually encounter in a computer or radio might range from trillionths of a farad (the unit of capacitance) up to hundreds of millionths of a farad. Supercapacitors have a million times larger capacitance than those "hundreds of microfarards" capacitors, up to hundreds or thousands of farads.

Now, it's a little questionable that the Lamborghini Sián (pronounced “Shaan”) sports car is mild in any sense of the word.  First off, it's equipped with a drive train that combines a massive V12 rated at 785 hp with the additional 34 hp from the hybrid system, giving the Sián a total of 819 hp, and enabling it to reach a top speed of over 350 km/h.  Secondly, there will only be a production run of 63 Siáns made and they’re all accounted for—at a cost that’s rumored to be $3.6 million.  Each.

The novelty of the car is the supercapacitors.  Capacitors and batteries are very similar in the way they're built and their schematic symbols reflect that.  Capacitors are parallel plates of conductors separated by a dielectric, and in "large value" capacitors the dielectric layers have electrolytes in them.  In batteries, like the lead acid battery that start most of our cars, there are parallel plates of lead in a bath of sulfuric acid electrolyte surrounding the plates.  The Sián substitutes an array of supercapacitors for the more familiar lithium ion battery pack in the hybrids we've seen from other manufacturers.


While Li-ion batteries can store around 20 times more energy for their weight than supercapacitors, the battery’s flaw is that it takes time to discharge this energy due to resistance within the device. The fast movement of charge in supercapacitors is due to very low internal electrical resistance. In effect, this means they can be charged and discharged at high specific current values (A/kg) that may be over 100 times that of batteries, without damaging the unit.

Consequently, while a regular battery can handle around 2,000 to 3,000 charge and discharge cycles, supercapacitors can ideally last across millions of charge-discharge cycles without performance degradation. That’s because no physical or chemical changes occur when a charge is stored within them.

On the other hand, capacitors don’t have the energy storage density of batteries. Therefore, they don’t store nearly as much power as a battery of the same physical size.

As developed for the Sián, the supercapacitor array is said to be three times lighter than a battery producing the same power. The electric system with the supercapacitor and e-motor weighs only 34 kg, thus delivering a weight-to-power ratio of 1.0 kg/hp. A symmetric power flow ensures the same efficiency in both charging and discharging cycles. Located in the bulkhead between the cockpit and engine, it also enables a favorable overall vehicle weight distribution.

Because supercapacitors can be charged so much easier than batteries, Lamborghini adds another feature that we see talked about (and, to be fair, is present in some electric vehicles) regenerative braking. Regenerative braking is a technology that recaptures the kinetic energy lost as heat when a car decelerates and turns it into electricity.


Thanks to the behavior of the supercapacitor, which contrary to normal Li-Ion batteries can be charged and discharged with the same power, the Sián’s energy-storage system is fully charged every time the vehicle brakes.

...The energy stored provides an instantly available power boost, allowing the driver to draw immediately on increased torque when accelerating away, up to 130 km/h (81 mph) when the e-motor automatically disconnects. As a result, it’s more than 10% faster than a car without this system.

The electrical energy system in the Sián is small to save weight (batteries are heavier than capacitors) and it's designed for power-assist scenarios rather than as a full-on hybrid power plant. It delivers rapid acceleration in low gears, with improved traction force provided by the combination of the V12 engine and the hybrid system. Traction force is said to be improved by up to 10% in third gear and the 30 to 60 km/h acceleration time is improved by 0.2 seconds compared to the company’s Aventador SVJ.

In higher gears and lower speeds, the electric motor increases traction force by up to 20%, reducing the 70 to 120 km/h acceleration by 1.2 seconds, again compared to the Aventador SVJ. This makes the Sián the fastest-accelerating Lamborghini ever, achieving 0 to 100 km/h in less than 2.8 seconds. [0 to 100km/h translates to 0 to 62 mph]

Interesting car for a very well-to-do clientele, but that's Lamborghini's forte'.  It will be interesting to see how the supercapacitors fare in practice, in real cars driven on real roads.  Preferrably in places like the Italian Alps or Dolomites. 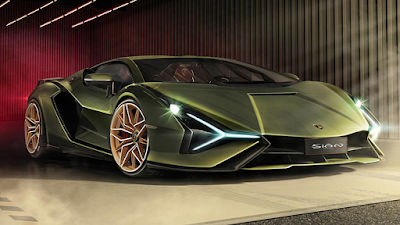