Techies, electronics hobbyists, electric vehicle enthusiasts and even just folks who read my old "The Least You Should Know Series", are all familiar with capacitors; they're one of the fundamental building blocks of electronics.  Capacitors have many roles in circuits, but one of the biggest is energy storage.

A capacitor is physically two metal plates separated by an insulator, and the basic unit is the Farad.  In radio work, where I'm from, I use values that go from under 1 trillionth of a farad or < 1 picofarad to a few millionths of a farad, say 10 or 20 microfarads.  If you look in old radio gear (or TVs) from the 1960s and before, the biggest capacitors you'll find are probably around a couple of hundred microfarads, and back in the early '70s capacitors didn't get much bigger than that - at least by my memory.  In the late 70s to early 80s, very large value "computer electrolytics" became available, for filtering computer power supplies.  In the early 80s, the first 1 Farad capacitors I had ever seen hit the market as a replacement for memory backup batteries.

As an aside, it's not uncommon for new students studying electronics for the first time to confuse capacitors with batteries because they're so similar in structure: two metal plates with something between them which are used for energy storage.  The key difference is that the metal plates of a battery are different metals and the "something" is an electrolyte; a conductive liquid or paste that allows electrons  to move between the two metals, while in a capacitor, the "something" is an insulator.  (Electrolytics do have a paste in there, but it forms an insulating layer on one or both terminals).  The voltage on a battery depends on the electrochemistry of the materials and while they provide lots of electrons, allowing you to get much more out of them than you can store in a capacitor, the electrodes are used up in the process.  Rechargeable batteries rebuild the electrodes.

Maxwell Technologies has been advancing the Farad-sized ultracapacitors in capabilities and recently introduced an engine start module that replaces a starting battery with 36,000 Farads of capacitor, as a dozen 3000 Farad capacitors in parallel.

If you drive trucks for a living, or work around them, you know that the stop/start cycle that delivery trucks need to support is a hardship on them.  Drivers used to leave the truck running to preserve their batteries, but nanny-staters have gathered to outlaw idling in many places.  The Maxwell ESM is intended for Class 3 to Class 6 trucks, which are typically those used for deliveries around cities. The product can replace one of the truck's batteries to provide the energy for its starting function.  These trucks typically carry three or four batteries, and the capacitor bank can replace one.  The product video on Maxwell's website says the module can provide "over one Million engine cranks at -40 to +65C". 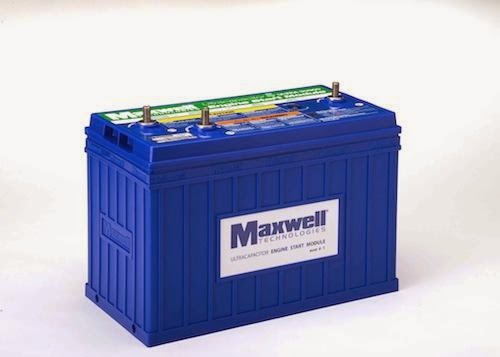 Capacitors don't get used up like battery electrodes do, so I would expect much more life out of one of these than any battery and they do claim a four year warranty.  Perhaps the life cycle degrades them, but I have smaller value electrolytics that have been working fine for decades.  The ESM is really cool tech to me, but maybe the ultracapacitors just don't have the lifetime of older technology capacitors.

(H/T to Design News, where opinions are divided, as always)