A New Gun Show In Town

The silicon swamp covers a large swath of Florida; even more depending on whom you're listening to.  I've even seen the name applied to Louisiana.  30 years ago, I heard the term used to describe the electronics industry in South Florida - there are many electronics companies down there.  I use it to describe this portion of central Florida that most of the PR people call the Space Coast, because the Space Center originally anchored the community.  There are a couple of major electronics manufacturers here, many smaller manufacturers and "IP shops", who come up with ideas and get the products built by contract manufacturers.

The biggest gun show in the Swamp is in the Melbourne Auditorium, held about once a month.  A new gun show producer decided to join the fray, and put on a show in the city bordering on the south of Melbourne.  This same producer puts on a show in Vero Beach, a half hour farther south, a few times a year.

Naturally we had to go check it out.  It was considerably bigger than I expected, although still smaller than the Melbourne Auditorium show.  It was also pretty busy, perhaps showing the area can support two gun shows.  Most of the sellers were FFLs selling the usual Glocken/Smithen/Tauren/whatever-en.  New guns in box.  There were also some surplus and used guns from individuals, along with a metric buttload of knifes, pepper spray, and all the non-gun items I see everywhere.  Ammo seemed pricey.  Forget the 500 round .22 bricks at $65, 9mm 115gr FMJ was over $20 for 50, and everything else seemed to tag along from there.  I specifically looked for .458 Socom, 6.8 SPC, and 6.5 Grendel; I only saw a couple of boxes of 6.8 for $38/box (of 20).  I was not motivated by anyone's ammo prices. 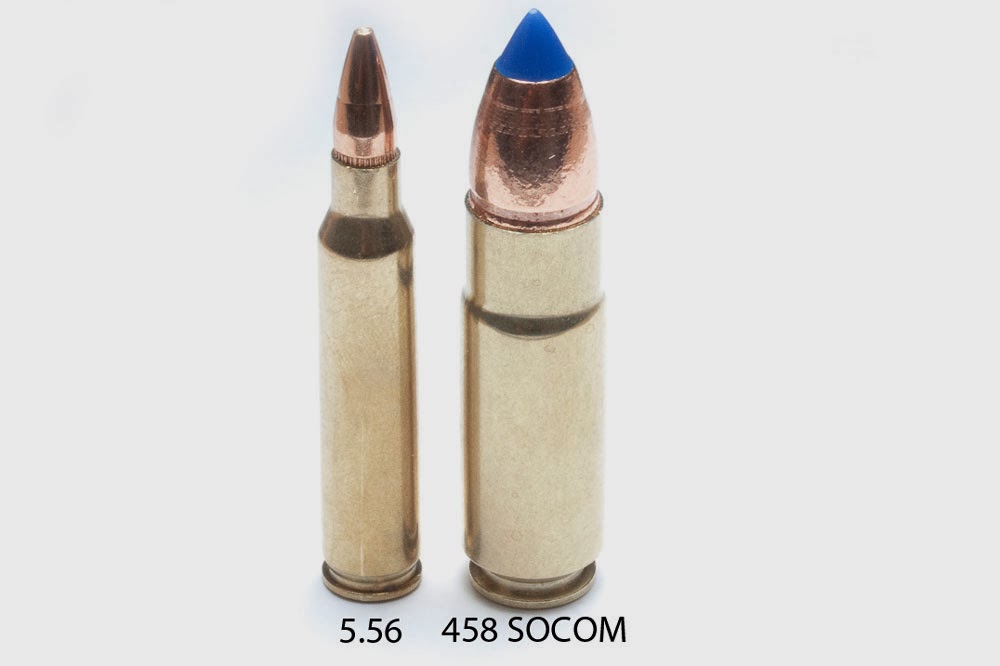 (To accurately reflect what I can find, we can shop out the picture of the cartridge on the right, leaving only the description - and the 5.56 round)

I saw a holster I thought was interesting for the pocket .380: a holster with a couple of big gaps.  The biggest drawback to a semiautomatic pistol, of course, is that it can be pushed out of battery by pushing the slide back only a little way - a sixteenth of an inch seems like it would do it.  This holster keeps anything from touching the slide - unlike my DeSantis rubberized holster.  I hate to think about pulling the gun in the DeSantis, trying to shoot it and having the slide out of battery.  This little holster is called a "shoot through" - as if it's designed for that.  It also has a rather large opening right where trigger protection ought to be.  Sort of essential if you're going to shoot without removing it from the holster, but my first thought was something in a pocket getting stuck in there and pulling the trigger while emptying pockets.  These pocket pistols have a mile long, eight pound pull on the trigger, so I suppose that would be enough warning. Anybody use these and like them?

In fact, all I got was a book I've kind of been interested in for a while. Guess I just like the title.