A Change of Perspective

Putting my post together Wednesday on how the DJIA has actually lost value since 2000 started a mental thread running on some background processor in my head and it keeps spitting out ideas at me.  These, in turn, are mind-bending.  Enough so that I thought I'd share some of them.  This is going to be a stream of conciousness kind of post.  And it's going to be on economics, the gold standard, fiat currency, and bunch of other things that merge in this thought stream.

Like any other topic that touches on politics, people argue about who's really responsible, but Nixon was the idiot in the White House who actually took the US off the gold standard.  But Nixon was backed into a corner and had almost no choice.  He might have stayed on the gold standard and had to weather a financial storm, but remember this was just a few years after the country was erupting in riots and cities were burning over the war, or anything.  The dollar was being squeezed by other countries concerned that US deficit spending was out of control, that LBJ's "guns and butter" policies had caused a surge in US borrowing and since the dollar was redeemable for gold, France and other countries started to demand payment in gold bars.  LBJ is remembered for his profligate spending on the Great Society programs, but also for stepping up the war in Vietnam.  So much for those who say deficit spending can't happen on a gold standard.  It can.  It just usually doesn't get to the levels we see today because nobody will buy the bonds.  Our recent governments make LBJ and his congress look like rank amateurs.

OK, that's a done deal.  We've been without a standard for over 42 years.  At that moment, gold was $35/ounce.  Today's price was $1382/ounce.  What does that mean?  It simply means that people with gold were willing to accept 1382 slips of paper and ink for it.  Tomorrow, they could decide there is no number of slips of paper they'd trade an ounce of gold for; or they could decide to accept a $20 bill for a one ounce "$20" coin.  Very probably neither one of those will happen.  Right now, the world is clinging to stability.  Financial talking heads will say "but gold doesn't pay dividends" and "gold doesn't grow".  The problem is that the dollar isn't growing in value, either.  The value of the dollar is shrinking. This inflation effects everything.  Everything.  Let's start with gold itself.  This chart, from 2011, shows the price of gold corrected to 1971 dollars.  Gold was around $1600 when this chart was made, but corrected for the persistent inflation the Federal Reserve cranks into the economy, you can see it's nowhere near its all time high from the 1980s (and I believe that's somewhat an artifact of the whole post-gold world starting so close to 1980). 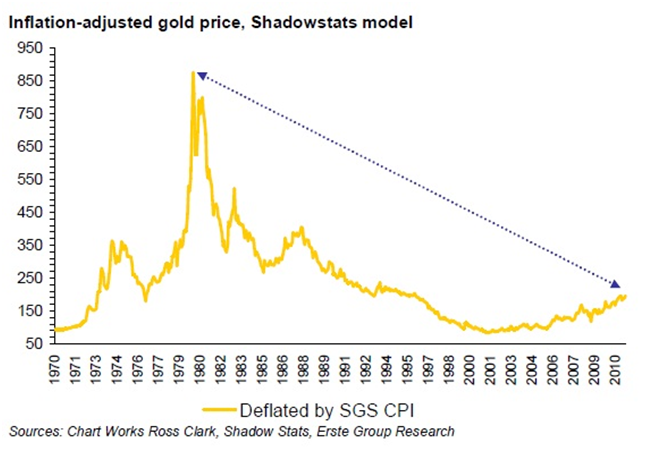 The trick here is to turn your thinking upside down.  If this is a standard, what's really happening is that gold is worth what it's worth, and that people who hold gold are willing to accept a certain number of slips of paper for it.  Today, people are accepting paper that's worth a tiny fraction of what that paper was worth in 1971, so they want a lot more of those slips of toilet paper.

Real growth is unusual; at least in large amounts.  Even without knowing your personal situation, it's a safe claim that virtually everything you have that you think has grown in value is just seeing the effect of inflation.  And without getting too personal, I'll show some examples from my life.  When I bought this house in 1984, gold was $350/oz. (this chart says that's about average for the year) so the house cost about 157 ounces of gold.  Today, 157 ounces are worth $217,000.  While I don't know what the house's market value is today, it sure isn't that.  I'd guess it's about 60% of that, meaning it has lost 40% of its value compared to gold.  If you talk in terms of dollar prices, though, it has more than doubled.  As another example, as I showed on that post Wednesday, a share of the DJIA was 43 ounces of gold in 2000 but only 11.9 ounces this week.  If you think your Indexed Stock Fund is worth more than what it was 14 years ago, you're mistaken; it's down about 72% (43-11.9 or 31.1/43).  If you haven't made more than 72%, not counting anything you've contributed, you've lost money!  How do you prepare for retirement in the face of the DJIA losing that much of its value?  Other than saying that's not the place to put your money, I don't know.

Has my pay grown?  Using gold as the standard, my first job as an engineer was typical new-grad pay, and in those days it was about 66 ounces of gold per year.  In the intervening 30-some years, my pay has gone up in terms of gold; but, regrettably, I'm not paid in terms of my weight in gold.

In my mind, these two facts make sense.  In real terms, although we've done work on the house and improved it considerably, it is a 33 year old house.  Compared to a new house, more is likely to go wrong with it.  And in my mind (at least) I've become more valuable to my employers due to an increase in knowledge, and a tendency to make fewer mistakes.  That's what economists used to call "increased productivity".

It has always puzzled me that people expect their houses to automatically be more valuable every year.  Remember the great fuss about the numbers of people who are "underwater" on their loans - as if that somehow absolves them from a contract they signed?  I think everyone, even the greenest kid, knows when they buy a new car it's worth less than the loan the minute they drive off the lot; why is a house more valuable the minute you sign the contract?  It's what I alluded to in Wednesday's post: we've become so accustomed to the "persistent, benign" inflation that the central banks strive for that we think it's the order of the universe.  But it hasn't been for almost all of history.  Look at this plot of inflation through the last century before the Federal Reserve: 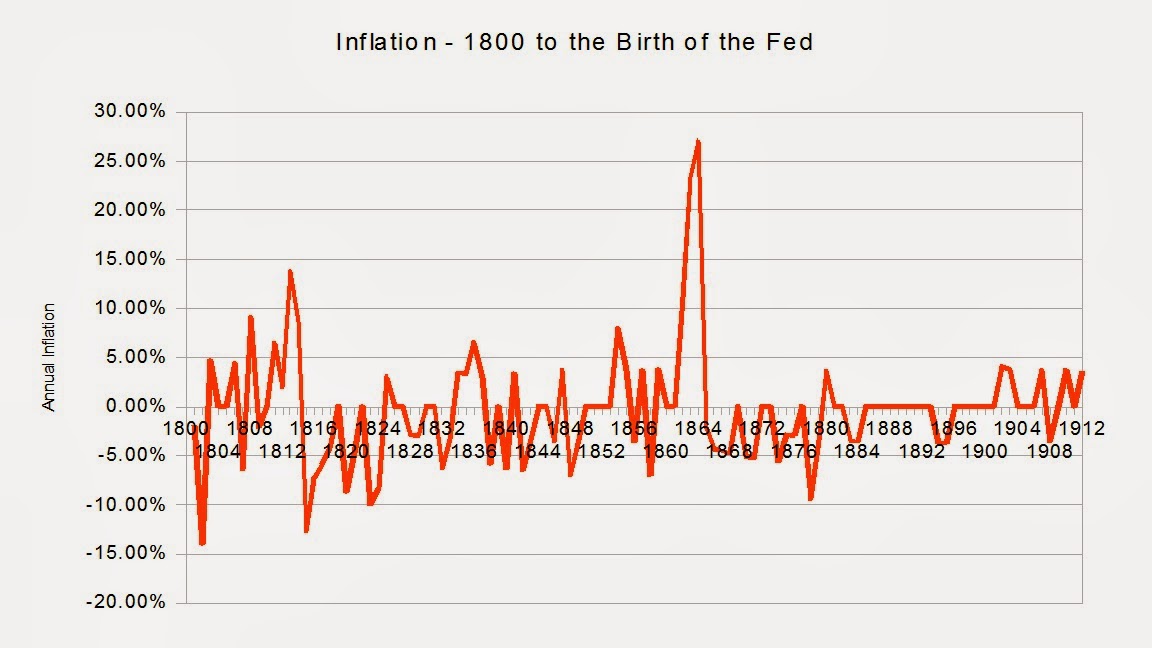 Sure there were periods of inflation and deflation in that 113 years, but the important thing is that it's centered around zero.  The expenditures for the civil war were obviously rough, but after the war we took our lumps to pay off war bonds essentially until the end of the century.  As a result of that, the Consumer Price Index was relatively constant until the birth of the Federal Reserve.  The dollar is now worth about 4% of what it was during the time this chart shows.

The "price" for going on a commodity standard, be it gold, silver, palladium or big stone rings, is that money can't be made up out of nothing.  Politicians don't like it because it reduces their ability to get involved in foreign adventures and it reduces their ability to buy votes.  Banks don't like it because it makes them need to be more careful.  Their profitability isn't guaranteed.  You wouldn't have tricks like the Federal Reserve giving banks the money to pay the Fed back the money that they borrowed from the Fed.  (yes, I'm afraid you read that correctly).  It very likely means that your wages won't necessarily go up every year - but neither will food or energy prices.  Prices will more likely effect real market forces, like shortages or surpluses, and that goes for the price of labor.  Since your pay really isn't going up in dollar amounts, if your mortgage is a tight payment now, it's likely to stay one, unless you get paid more for being worth more, or get more experience, or somehow become more valuable.  And you're probably not going to be able to get a second mortgage to buy more stuff anyway, unless your house truly does become more valuable.  (Maybe you live near an oil boom, or your location becomes popular for some reason.)  It's a different life.

In other words, the powerful and politically connected won't like it.  They have to be more honest and ethical.  They love the power to mess with something as critically important as money.  So what if those dollar bills are worth less than they should be, as long as they end up with more than other people?

I've said many times, there's nothing inherent in a fiat currency that means it can't work, it just never does.  Politicians have to be mature adults, they have to spend within their means, and they have to not debase the currency.  They have to treat it with the same deference they'd treat gold or silver or anything else that's valued and limited in availability.  That's why it never works. To be fair, though, rulers have messed with commodity standards down through history, too, and made them fail.  Neither is unbreakable.  Neither is without disadvantage.

Why is this important?  When you hear about the loss of the middle class standard of living, this is one of the central causes.  The manipulations created by the central banks, the decrease in the value of the dollar to a few percent of what it was in 1913; this is the root cause.  It would be a very different world without the central banks, but their role has morphed from protecting the monetary supply to corrupting it in the service of the governments and fellow bankers.  Small inflation is good for them, but a "persistent benign deflation" would destroy them.  In contrast, I think I'd like the possibility of paying a bit less for energy, food or other necessities every year.  That possibility used to exist before the central banks.

A world with a gold standard would require a very different perspective.  Could you get used to not making more every year, if everything you bought cost the same, or less?  To some degree, people value the illusion of wealth they get from seeing their home price go up in dollars, and they feel wealthy when they see their 401k worth 50% more than it was in 2000.  They've never even asked if they've really made money or lost money.  But if everything inflated at the same rate: consumer prices, wages and stock prices, no one would have made or lost a cent.  Everyone would be exactly as well off as they started.  It would be like everyone in the country re-marking every bill in their wallets with a new value twice what it used to be.  Everyone would have twice as much money but since everything costs twice as much they'd have exactly the same wealth.  Nobody ever asks these questions.

Posted by SiGraybeard at 7:27 PM

Labels: economics, Me, the big picture