Keep Your Daughters Out of Massachusetts

I say to keep your daughters out because I'm assuming all of the adult women already know how to behave properly in this situation. 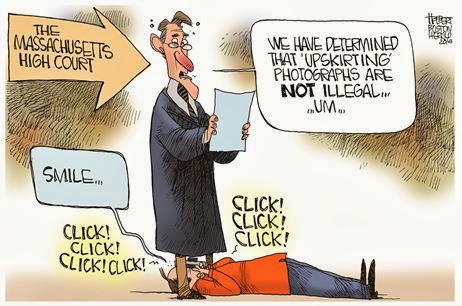 So since the Massachusetts High Court ruled that you have "no reasonable expectation of privacy" while out in public in the state, and that the state's laws prohibiting peeping Tom voyeurism doesn't cover taking those "upskirt" photos.


The Massachusetts Supreme Judicial Court ruled the practice does not violate the law — a so-called “peeping Tom” law written 10 years ago — because the women who were photographed while riding Boston public transportation were not nude or partially nude.

The current state law prohibits photographing an unsuspecting nude or partially nude person “is concerned with proscribing peeping Tom voyeurism of people who are completely or partially undressed and, in particular, such voyeurism enhanced by electronic devices,” the court ruled.

So what do I mean about adults knowing the right way to behave?  I personally think the right response to someone swiping a camera under your skirt would be a 2x4 or a couple pounds of steel up side the cretin's head.  Something that would induce a coma.  While a couple of JHPs to the center of mass wouldn't seem like too much of an overreaction to me if it was my daughter, in The Peoples' Republic of Massachusetts that would probably be considered antisocial and get you put away for a long time in a small cage.  Like New York, it's a place where self defense is considered criminal.