By now, everyone has heard the story about what certainly appears to have been an attack on power stations in the Silicon Valley area of California last year.  This week, Lou Frenzel, currently an editor for Electronic Design magazine addressed it in an online editor's blog.


The main components in our power grid distribution system are transformers.  They step up the generated voltage to a higher level for more efficient transport over very long lines.  Then they step the voltage back down in several stages for final consumption.  These transformers are located at the power plants and thousands of substations.  They are big and right out in the open.  Weather does not bother them, but bullets do.  They are the weak links in our power grid.

Last year someone decided to shoot out the transformers at PG&E’s Metcalf substation in Silicon Valley taking the substation out of service.  Luckily, PG&E was able to reroute the power to prevent a total blackout.  But it took months to get replacement transformers and restore service.

This is a major wake up call to the utilities.   Terrorists, or disgruntled customers, can easily take down a substation with a rifle at long range and get away with it.  The transformers are defenseless as they are not covered or protected in any way.  Furthermore, replacement transformers are hard to come by.

Lou Frenzel is a relatively sane old graybeard, and fairly well known as a technical author; he sees this as a problem the power company engineers need to address.  No calls for gun control or massive government programs.  What bothers me about this is the reaction of ED readers whom I have to see as my fellow engineers.  Yeah, I'm sure some are not, some are students, some are probably loosely affiliated with the profession, but the reactions are bothersome.  The first half dozen comments included censorship - that ED shouldn't have even mentioned this was possible; that the story is paranoid conspiracy theory (?); and that the real reason transformers are vulnerable to rifle shots and few spares are held is "electric utilities must afford despite paying their "non-profit" CEO's millions of dollars in a system allowed to break continually so they can maintain artificially large budgets despite tax-payers being broke."

When I was "but a larval engineer", a graybeard told me "you can't out think someone who isn't thinking".  It's a truism that has stuck with me ever since.

The problems with spare transformers are (1) these transformers are expensive, so the companies and their regulators probably consider having warehouses full of spares as poor use of capital, and (2) they are enormous - and that means problems storing them - those warehouses have to be enormous (read that "expensive", too). Add to those issues that it appears there is very little standardization of these designs, and very few companies who make them.  Frenzel says there are seven companies in America that know how to make them.  And without someone shooting them, these transformers have a very long life.  With reasonable maintenance, they might last virtually forever.  There are no moving parts.  Needing to keep spares to deal with an attack like this is a major change in how utilities figure replacement costs

As a bunch of gunnies, you and I know that there's no reasonable way to prevent a determined individual with a big bore rifle from getting at them, if the transformers are found in the open as they usually are.  It's really a pretty simple operation, after all. 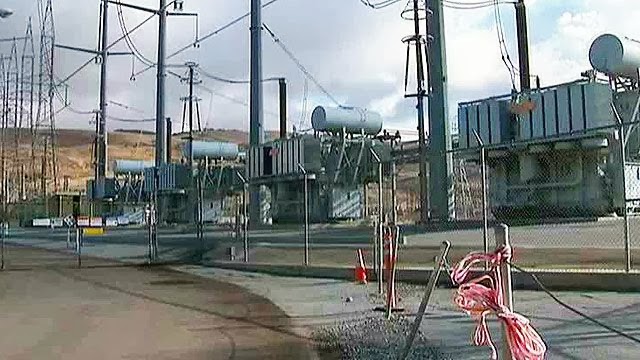 As a bunch of engineers, the other readers and I should be thinking about increasing the survivability of the transformers.  Hardening the targets.  Perhaps steel or Kevlar curtains.  Where possible, perhaps they could be put under ground, or recessed below where they're very visible.  How about in the bottom of an empty concrete "swimming pool"?  The idea being to obscure the visibility, making seeing the target harder, and then to absorb the energy of the shot.  Perhaps transformers that can run without cooling oil, by reducing losses.

Obviously, like personal vests, we can't make them "bulletproof" to every level of attack, but this was too easy.  Although we all know how badly reporters get these facts, I read the shell casings found were 7.62x39 (of course they just called them AK-47 cases).  If Bubba or Abdul can take out a substation with just a .30, they need to be hardened.  If we can make an installation that would survive impact from .50 BMG, that's got to be as good as they're likely to get, short of an RPG.