More Tales From the Over Regulated State - Federal Fart Control

As generations of comedians have said, I'm not making this up.


This comes despite falling methane emission levels across the economy since 1990.

The White House has proposed cutting methane emissions from the dairy industry by 25 percent by 2020.


It’s not just the dairy industry that the Obama administration is clamping down on. The White House is looking to regulate methane emissions across the economy from agriculture to oil and gas operations — all this despite methane emissions falling 11 percent since 1990.

Methane emissions have largely been reduced because of the incentive for companies to capture it and sell it for monetary gain. Oil and gas companies, for example, have been looking for ways to increasingly capture methane leaked from drilling operations which they can then sell.

And here's the real meat of this proposal.  Just as diligently as oil and gas companies have been working to capture any methane production in their fields, (leaking methane is throwing away money and that just doesn't go over very well with any business I know), the EPA has been working to shut down energy production  from coal and other non-green (that is, real) sources.  They are, of course, as anti-progress and especially anti-American progress, as you'll ever find.


“President Obama’s plan to reduce climate-disrupting methane pollution is an important step in reining in an out of control industry exempt from too many public health protections,” Deborah Nardone, campaign director of the Sierra Club’s Keeping Dirty Fuels in the Ground campaign. “However, even with the most rigorous methane controls and monitoring in place, we will still fall short of what is needed to fight climate disruption if we do not reduce our reliance on these dirty fossil fuels.”

Aside from the obvious anti-technology, anti-energy independence aspect, this obviously falls into  Moochelle's famous dietary nonsense, too.  Its a progressive perfecta!  If there's 25% less cattle, the cost of beef in the diet has to go up, and people will eat even less of it.  Reeks of a Cass Sunstein "Nudge"  doesn't it? 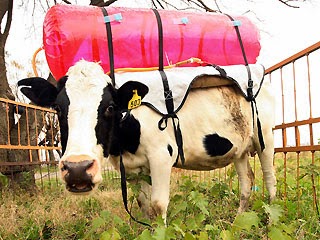 Remember:  as always, fart control isn't about the farts - it's about the control.

Labels: big freakin' out of control government, commies and other idiots, enviro-nuts and flakes