If I Was an Oregonian, This is Not What I'd Want to See

According to the Oregonian, the State Police have pulled their State Troopers out of Portland and returned them to their regular duties around the state.  They will no longer put their troopers on the line against the rioters in Portland, since the city will do nothing to stop them and the county has said most people will never be charged.

“We’re in a county that’s not going to prosecute this criminal behavior,” Fox added.

It was a pointed reference to Tuesday’s announcement by new Multnomah County District Attorney Mike Schmidt that his office won’t pursue many of the charges against demonstrators, including disorderly conduct, interfering with a police officer and even riot in some circumstances.

The state police have been in Portland since a July 30th agreement between Governor Kate Brown and the US Department of Homeland Security.  Yes, this was an agreement to the get the DHS out of Portland, where they had deployed special officers to protect Federal property in Portland; the Mark O. Hatfield United States Courthouse in downtown Portlandistan.

While I can understand the state police wanting to GTFO of Portland, I think if I was living in Oregon, I'd prefer it if the State Police were to arrest the Portland city government, from the Mayor down as appropriate, charge them with dereliction of duty, and put them all into state prison to await trial.  That's because I don't know if the state recognizes treason as an offense, and to be honest, I don't know if they have dereliction of duty in their laws, either.  Just Get. Them. Out. Of. There.  Impeach?  Recall?  Tar and Feathers?  I'm easy.

It’s unclear what the departure will mean at the federal courthouse as the city enters its 78th night of consecutive demonstrations against police brutality and systemic racism since the May 25 killing of George Floyd in Minneapolis.

This ceased being about “police brutality, systemic racism,” and George Floyd after the first few nights - if not the first few minutes.  It's about tearing down and taking over the country.  Classic top down, bottom up, inside out communist tactics.  It's how the communists took Czechoslovakia after WWII. 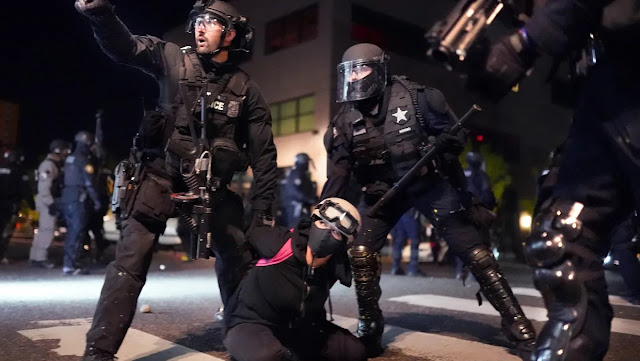 Posted by SiGraybeard at 4:34 PM

Labels: commies and other idiots, Events