Variations on a Theme

Variations on the theme of spacecraft reusability.

Let me start with this morning's Falcon 9 Starlink launch.  In contrast with Wednesday night's Crew-3 launch we were able to watch the launch until the booster stage was dropped and the second stage engine burn started, after which high clouds wiped out what was very low contrast display. 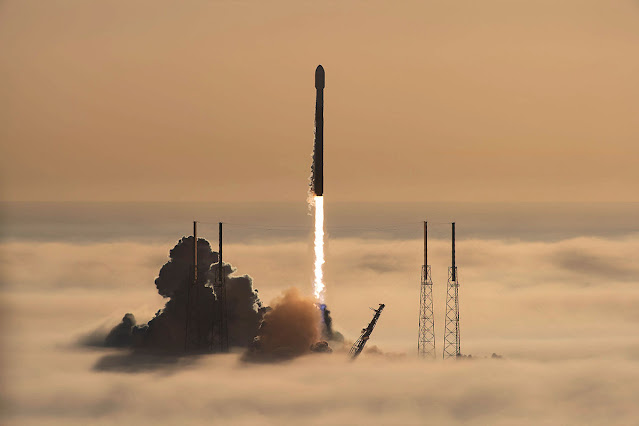 A rare day around here this time of year, when dense fog covers the first "few dozen" feet above the ground and the rest of the air column is clear.  That's more common in the winter.  My decades in photography tell me there's a colored filter on the camera, too.  Especially given the colors in their 20 second video of the launch.

This was the ninth mission for this booster, and the mission went without a hitch.  The booster landed on recovery drone Just Read The Instructions NE of the Cape.  I'd bet the world's only "club" of orbital class boosters that have had ten missions will soon get a new member.

We know that China, the European Space Agency (ESA) and Russia are talking of developing reusable boosters right now.  The small satellite launch sector is facing it because the ride sharing missions on a Falcon 9 are price competitive with any of the smaller boosters.  Rocketlab, the company originally from New Zealand and now both New Zealand and USA, will recover their next booster after allowing it to splash into the Pacific, and intend to catch them in the air with a helicopter soon.

A little over a year ago, I mentioned a space blogger named Casey Handmer and his October of 2019 article that the SpaceX Starship is a Very Big Deal.  I found today that in October of this year, he reprised that piece with another article that's absolutely worth your time to read.  This one is called Starship is Still Not Understood.  As I usually do, a few out of context paragraphs to bring up some interest.

Two years ago, Raptor was unproven, aero flaps had never been demonstrated, and stainless steel rocket construction was still troubled. Today, these major programmatic risks are largely retired. SpaceX has qualified their full flow staged combustion engine. They’ve done a full system test of the landing process, and they’ve ramped up QA in construction. There are still major risks on the critical path between now and a fully reusable Starship, but no miracles are required to solve them. For example, many mature heat shield (TPS) designs already exist. SpaceX can try to make a better, cheaper, lighter one but if it doesn’t work out, they can always trade some mass and just use PICA, like Dragon. In just two years, practically all the low TRL science projects have been solved.
...
Starship matters. It’s not just a really big rocket, like any other rocket on steroids. It’s a continuing and dedicated attempt to achieve the “Holy Grail” of rocketry, a fully and rapidly reusable orbital class rocket that can be mass manufactured. It is intended to enable a conveyor belt logistical capacity to Low Earth Orbit (LEO) comparable to the Berlin Airlift. That is, Starship is a powerful logistical system that puts launch below the API.
...
Let me explain the fundamental issue. NASA centers and their contractors build exquisitely complex and expensive robots to launch on conventional rockets and explore the universe. To take JPL as an example, divide the total budget by the mass of spacecraft shipped to the cape and it works out to about $1,000,000/kg. I’m not certain how much mass NASA launches to space per year but, even including ISS, it cannot be much more than about 50 T. This works out to between $100,000/kg for LEO bulk cargo and >$1,000,000/kg for deep space exploration.

Enter Starship. Annual capacity to LEO climbs from its current average of 500 T for the whole of our civilization to perhaps 500 T per week. Eventually, it could exceed 1,000,000 T/year. At the same time, launch costs drop as low as $50/kg, roughly 100x lower than the present. For the same budget in launch, supply will have increased by roughly 100x. How can the space industry saturate this increased launch supply?

Space industry watchers have heard the stories of at least one top level engineer from Blue Origin jumping to SpaceX.  Casey Handmer can see it happening to old space companies like Boeing.

At this point, the real fear of other industry players should be that SpaceX won’t even ask them to try. Instead, they’ll wake up one morning and find that all their ambitious junior engineers have taken a pay cut and moved to Texas, while no-one can work out why Starliner’s valves refuse to work properly.

I bet that left a mark.