Just past the midpoint of the year and with this morning's launch of Starlink 4-22, SpaceX has tied last year's record for their number of launches in a calendar year.  Last year, they had 31 launches, and began this year by saying 52 - one per week - was the goal.  At week 29 of this year, they're well on the way.  The morning was too cloudy here to see anything outdoors, so we made do with watching the video coverage on their YouTube channel.  It should be watchable at this link for some time to come. 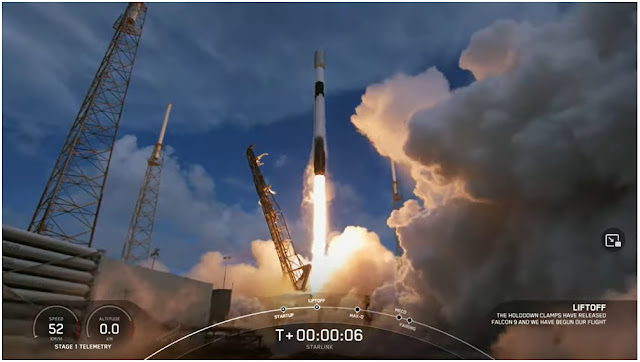 Screen capture from the video.  This is Launch Complex 40 at Cape Canaveral Space Force Station; pad 39A launched the CRS-25 mission this past Thursday and the pad wasn't turned around in time for the preparations for this one.

The booster here is 1051 on its 13th flight, denoted by referring to it as 51.13, joining the most experienced handful of boosters in their fleet and performing the 124th landing of a Falcon 9 booster.

Beyond the now-routine growth of the largest satellite constellation in history, Starlink 4-22 also tied a number of records related to Falcon 9’s extraordinary launch cadence.

First, the mission was SpaceX’s 31st successful launch of 2022, tying the company’s annual cadence record – 31 launches spread over all of 2021 – in just over half (54%) of the time. If SpaceX is able to sustain the same pace for another five months, it could end 2022 having completed around 57 launches in one year – a new record for a single rocket.

Note that last line that referring to a single rocket, means a single rocket variant.  There's more.  This was the eighth launch in 30 days.  That narrowly misses the record of eight in under 28 full days set by the Soyuz-U in 1980.  While simply maintaining the record setting launch cadence they're currently enjoying won't get them to 57 launches in the remaining 23 weeks of the year, 57 does seem within reach.