Earlier this week, the story broke that the Yuri Borisov, the new head of Russia's space agency Roscosmos, said they would be abandoning the International Space Station when their current contract expires in 2024.

That story was on Tuesday, July 26.  The next day, the story started to break that the situation wasn't that straightforward.  The bigger picture is they're saying they're not leaving the ISS until their replacement space station is operational.  I stumbled across this while trying to track down why my weekly Rocket Report from Eric Berger at Ars Technica hadn't arrived.  I went looking for his Twitter account and found this: 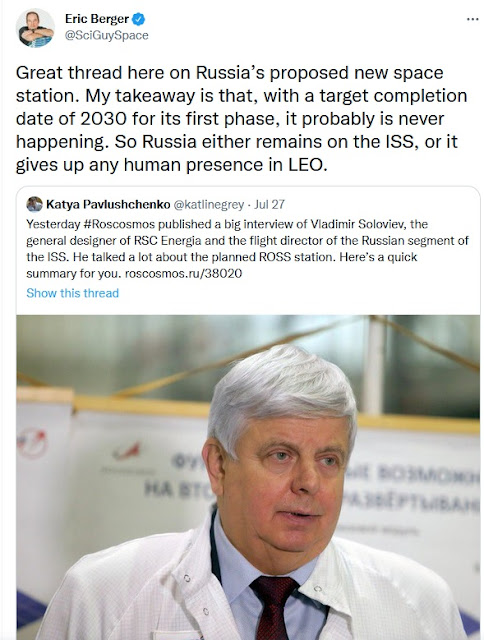 The Tweet he references is from Katya Pavlushchenko, whom it turns out I've quoted before on a similar subject (the original "Russia is abandoning the ISS" stories last March).  I understand she can read the original sources in Russian and references them in posts.  Her Twitter account includes much more discussion about this and the format being spread over several screens a few lines at a time makes it hard to summarize.

The shortened version seems to be that Russia is aware that without continued work in their module on the ISS they're going to lose the valuable experience of having crews get time on orbit.  The first module of what's called #ROSS on Twitter is talked about as launching in 2028.

At the first phase, #ROSS will be placed on a solar-synchronous orbit with an altitude of 334 km and inclination of 96.8°. Later it will be changed to 372 km and 96.9°. This will allow to observe most of the territory of Russia (and not only Russia, as Soloviev noticed).

This orbit will also allow to conduct the study of both Earth poles with optical, infrared, ultraviolet, radio and other detectors, and will allow to track the movement of various objects in the areas of the poles, which is an important scientific experiment.
...
#ROSS will work mostly in automatic mode, without human presence on board, but may be visited if needed. As a result, the station will be used more efficiently not only from scientific, but also from the economic point of view.

There's much more to wade through but among the key points is that it hasn't actually been designed.  Everything spoken about is more design goals than known characteristics.  On May 27, Roscosmos and the Council on Space of the Russian Academy of Sciences produced this concept of the station. It appears smaller than the ISS, and if it's not going to be continuously manned, that's probably something that can be put up with.  I don't recall where I heard this, but the saying was that, "the only people comfortable with the ISS are submariners." 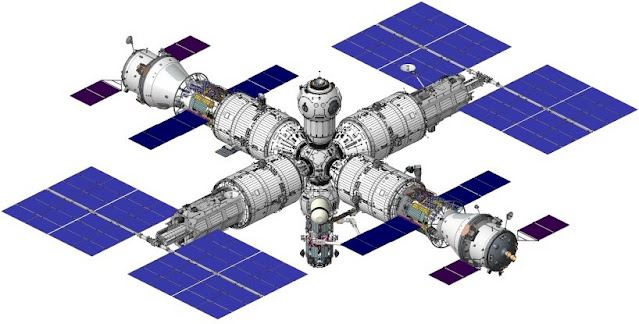 I'm inclined to agree with Eric Berger.  If Russia is really saying they're not leaving the ISS until their own station is completed, 2030 or later is likely, especially with their first launch being talked about for 2028.  Recall that the ISS is expected to either be retired or require more regular maintenance by 2025.