Did it Seem Hard to Finish Your Work on Wednesday the 29th?

If so, you're very sensitive.  Wednesday actually was a shorter day, not in terms of the time from sunrise to sunset but the actual time for the Earth to rotate a full 360 degrees at the equator.  Looked at that way, it was 1.595 milliseconds shorter than 24 hours so the day was over that much before it "should have" been.  For the record, the title is a wisecrack.  Nobody would notice 1.6 milliseconds.  If you're in the US, your lights are flickering 10x slower than that: every 16.7 milliseconds. 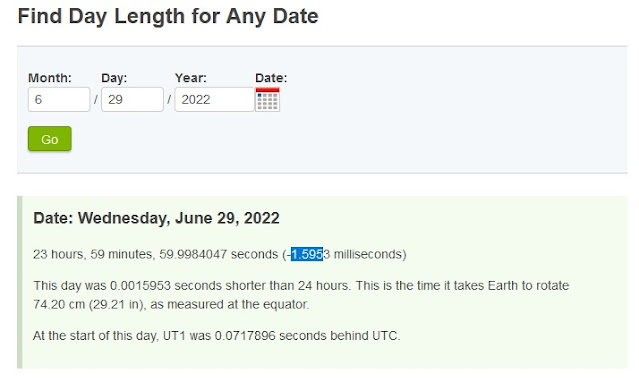 Don't fall into the catastrophic thinking that this means we're headed for some sort of disaster.  The length of days varies all the time.  Since Wednesday, each day has been a little longer, but that trend won't hold indefinitely.  This graphic from the same site shows that the shortest day in '22 is coming July 26th, and will be around 130 microseconds shorter than today. 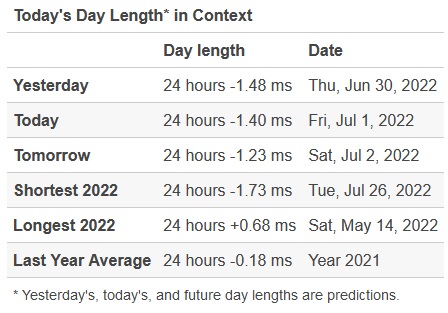 Predictions used for the future, of course.  The longest day for this year so far (and according to the predictions, should remain that) was Saturday, May 14, the day was 680 microseconds longer than it should have been.

You may recall leap seconds, like we had in 2015 on June 30th at midnight, where a second gets added to the clocks because the days had been consistently too long.  How this is done is the clock is held for one second, typically at the stroke of midnight.  When the clock is at 11:59:59 PM, it holds for one second before showing 12:00:00 AM. In this case, with days being short, they refer to it (somewhat clumsily, IMO) as adding a negative leap second.  Adding a negative is, of course, subtracting.  The clock would get to 11:59:58 PM and the next tick would be 12:00:00 AM.

There hasn't been a leap second added since December 31 of 2016, so while some days have been a bit longer and some have been a bit shorter, the overall years have been relatively close to the proper number of seconds.  If every day was 1.6 milliseconds too short, a second could be subtracted off the clock every 625 days.  That's not likely.  There has never been a negative leap second and there's genuine concern that millions of pieces of software in use were designed without thought of a subtracting a leap second.

Still, the typical day is too fast this year and has been for some years.  We might well be heading for the first negative leap second.