SpaceX's CRS25 mission to the International Space Station was originally scheduled to be June 10th but was then delayed on the 7th by the discovery of a possible leak from one of the Cargo Dragon's Draco thrusters.  Dates moved around a bit but the last I heard was No Earlier Than (NET) July 11th. Word was released earlier in the week of a three day slip to NET July 14th.

“The new target launch date supports ongoing Dragon spacecraft inspections as well as repair and replacement of any components that could have degraded by exposure to mono-methyl hydrazine (MMH) vapor found during testing in early June. In order to allow a more detailed off-vehicle inspection of the parachutes, the SpaceX team made the decision to replace the main parachutes on this spacecraft.

The new date also allows for launch of the uncrewed cargo mission for the earliest possible rendezvous opportunity with the International Space Station following the upcoming high-beta angle period when the sun angle with space station’s orbital plane causes problems with thermal and power generation at the microgravity laboratory in the planned docking attitude for visiting spacecraft.” 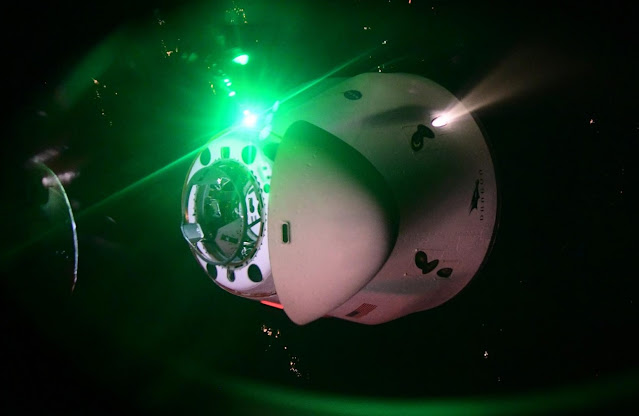 The Cargo Dragon from mission CRS-23 arriving at ISS and just off the docking visible at left.  Photo by ESA Astronaut Thomas Pesquet.  August 30, 2021.

This is one of six Falcon 9 launches on the manifest for July; the first will be NET next Thursday, July 7, from SLC-40 at the Cape, followed by one from Vandenberg's SLC-4E on Friday, July 8.