I haven't mentioned the Psyche asteroid mission except in passing, but it's an interesting concept.  Formally named 16 Psyche, it's an asteroid believed to be entirely (or almost so) made of metal.  As the mission web page at Arizona State University teases,  “For the first time ever, we are exploring a world made not of rock or ice, but of metal.” From time to time, I come across speculation of someone finding an asteroid made of gold or platinum and how rich they could get.  Chances are Psyche isn't that, but might be the heavier metals found in planetary cores like iron, and nickel.  (Disclaimer: only my interpretation.)

The probe arrived at the KSC in early May for testing and integration with the Falcon Heavy that will carry it to the long transfer orbit to the asteroid.  By the middle of the month, it had become evident that something was wrong.  Not long after, the Psyche blog updated, saying

NASA’s Psyche spacecraft is nearing the final stages of preparations for launch, and the mission team is working to confirm that all hardware and software systems are operating correctly. An issue is preventing confirmation that the software controlling the spacecraft is functioning as planned. The team is working to identify and correct the issue. To allow more time for this work, the launch period is being updated to no earlier than Sept. 20, 2022, pending range availability.

In the weeks since it has emerged that the issue is with the special testbed used to connect to the spacecraft to test it thoroughly. 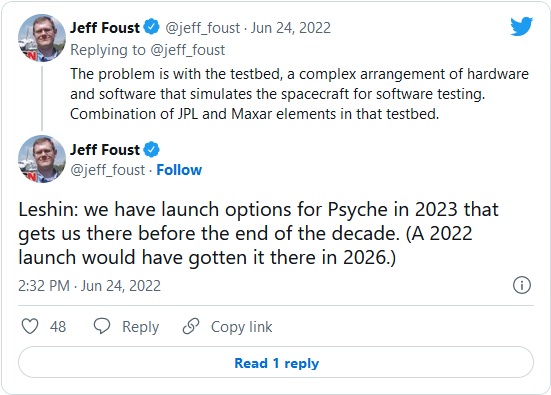 On Friday, NASA put out a press release explaining that the program has cancelled its launch for calendar 2022.  The launch window would have closed on October 11th, so they were running out of time.

Due to the late delivery of the spacecraft’s flight software and testing equipment, NASA does not have sufficient time to complete the testing needed ahead of its remaining launch period this year, which ends on Oct. 11. The mission team needs more time to ensure that the software will function properly in flight.
...
“Flying to a distant metal-rich asteroid, using Mars for a gravity assist on the way there, takes incredible precision. We must get it right. Hundreds of people have put remarkable effort into Psyche during this pandemic, and the work will continue as the complex flight software is thoroughly tested and assessed,” said JPL Director Laurie Leshin. “The decision to delay the launch wasn’t easy, but it is the right one.”

It raises a peculiar problem for SpaceX.  They've had four Falcon Heavy launches on the manifest, potentially all for this year.  Every one of them is slipping because of problems with the payloads; the side boosters and the rest of the four Heavies are all waiting.

“For unknown reasons, virtually every near-term Falcon Heavy payload has slipped significantly from its original launch target. Within the last few weeks, USSF-44 – meant to launch as early as June 2022 after years of delays – was “delayed indefinitely.” Delayed from Q3 2020, USSF-52 is now scheduled to launch in October 2022. ViaSat-3, once meant to launch on Falcon Heavy in 2020, is now NET September 2022. Jupiter-3, a record-breaking communications satellite that wasn’t actually confirmed to be a Falcon Heavy launch contract until a few weeks ago, recently slipped from 2021 and 2022 to early 2023.”