The JWST Team is Teasing Us

A check of the "Where is Webb" site shows that the James Webb Space Telescope hasn't been declared fully operational yet because the team is in the last stages of commissioning all of its instruments.  They are, however taking images and the people who have seen them are going gaga over them.

Recounting his first encounter with data from Webb, [Thomas] Zurbuchen [who leads NASA's scientific programs] said he, too, was in awe of what the telescope had proven capable of. He said he almost cried when looking at the first photos taken by the new instrument.
...
NASA's deputy administrator, Pam Melroy, said she was blown away by the images Webb has produced so far. "What I have seen moved me, as a scientist, as an engineer, and as a human being," she said.  [EDIT: clarifications in square brackets added here - SiG] 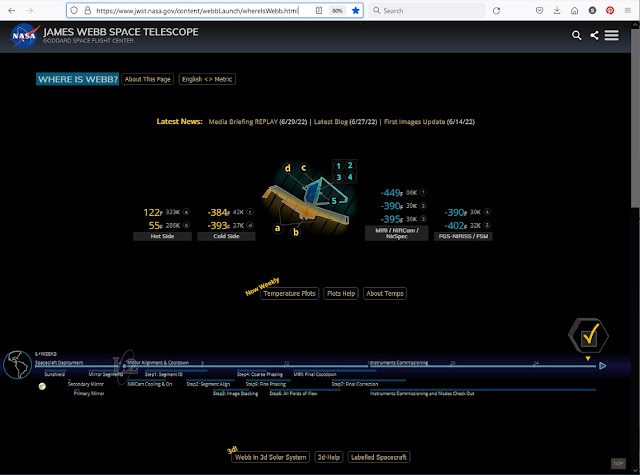 Screen capture of "Where is Webb?" site at 8:30 PM June 29, '22. Note the temperature of the sun-facing side of the sunshield in that broad, tennis court-sized area is 122F (leftmost temperature next to the view of the JWST) while the cold, shaded side opposite at the back of the telescope is -384F, while specific instruments range from -390 to -449F.  (Absolute zero, 0 Kelvin, is -459.67F).  That shield works pretty well!

It has been six months since the Christmas Day launch of the JWST, aboard its Ariane 5 ride to its ultimate L2 point orbit over 900,000 miles from Earth.  The nerve-wracking deployment of the sunshield, the unfolding of the main telescope and meticulous alignment of the optical system are all in the rear view mirror now.  Remember the concern over the 344 single-point failures that could scuttle the mission?  All in the past.  For some of the principals on the design of the Webb, it has been two decades of work now going into its third - and the one they worked twenty years toward.

Since the beginning of the mission, the milestones have said that the telescope will be completely commissioned and operational by July 12th.  That's two weeks from this Tuesday (yesterday as I write).

NASA said it plans to release several images beginning at 10:30 am ET (14:30 UTC) on July 12, the result of Webb's "first light" observations. On Wednesday, space agency officials said the images and other data would include the deepest-field image of the universe ever taken—looking further into the cosmos than humans ever have before—as well as the spectrum of an atmosphere around an exoplanet. By looking in the infrared, Webb will be able to identify the fingerprints of small molecules, such as carbon dioxide and ozone, that will offer meaningful clues about the habitability of worlds around other stars.

Final words to Eric Berger of Ars Technica, starting this with a quote from Thomas Zurbuchen, mentioned in the first quote up above:

"It's really hard to not look at the universe in a new light and not just have a moment that is deeply personal," he said. "It's an emotional moment when you see nature suddenly releasing some of its secrets. and I would like you to imagine and look forward to that."

Unfortunately, we will have to wait nearly two full weeks to see the final products from Webb's first observations. NASA said it will not be releasing any images early, even on an embargoed basis. But we've waited 20 years for Webb to come online and offer a truly worthy successor to the Hubble Space Telescope. I suppose we can wait a little while longer.