SpaceX Eyeing Another Launch Pad on the Kennedy Space Center

The people at SpaceX are quick to start down a road to a desired goal, be it launch facilities or the vehicles they launch.  A consequence of that is instead of analyzing for long periods to be absolutely sure they don't waste time, they end up re-doing things, and they're very fast at fixing things and moving ahead.

NASA raised a concern recently that started making it to the top of the "are we sure we're doing this right?" stack of questions; is the Starship Orbital Launch Mount (OLM) that they're building alongside Pad 39A too close to the pad?  In particular, if a Starship should do something undesirable, like blow up on the pad or just above it, will it destroy the infrastructure they need to launch Crew Dragon spacecraft?  That would leave NASA in the position of having no way to get crews to and from the space station.  Due to these concerns, NASA and SpaceX have started considering options to handle that risk.

There's more at stake than crew missions to the station, though.  Pad 39A is the only pad in the world that handles the Falcon Heavy, which is emerging as a premier heavy lift vehicle for NASA and the US military.  Yesterday, I mentioned the Falcon Heavy will be lifting the Lunar Gateway to its desired orbit, and I've previously posted about it being the launch vehicle for the Europa Clipper mission (2024 schedule).  Both of those are farther out in time, but there are five Falcon Heavy missions slated for the next year.  They would have started already except for payload delays holding up the missions.

The most recent picture I can get of the OLM area at Pad 39A is in a video from NASASpaceflight (.com).  This is a screen grab of a shot that shows the launch tower on the left foreground and the six steel tubes (circled) that are the base of the OLM.  The concrete structure to the left and in front of the six tubes is the base of the Orbital Launch Integration Tower that will be built. 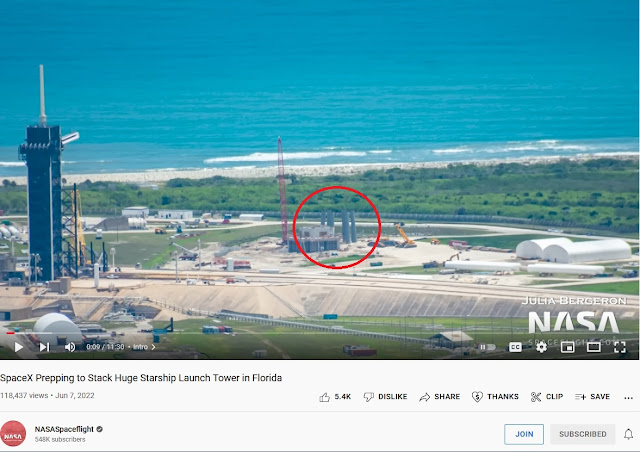 The most direct solution would be to add the facilities to their other launch pad, SLC-40, if that could be done without taking it out of operation, and that's being studied.

In response to NASA’s concern, NASA executive Kathy Lueders – in an interview with Reuters – says that SpaceX has begun working with the agency on plans to both “harden” Pad 39A and modify its Cape Canaveral Space Force Station (CCSFS) LC-40 pad to support Dragon launches. According to Reuters, however, receiving approval to put those plans into action “could take months.” Depending on how significant the facilities LC-40 would need are, there’s also a chance that SpaceX would need to complete a new FAA environmental review to construct a crew access tower.

An extreme alternative would be to lease or buy another unused pad on the Cape Canaveral Space Force Base side.  If any are available.

In the big picture sense, these things need to be addressed but they're not urgent to the point of "drop everything else and fix this."  The Pad 39A Starship Orbital Launch Mount won't be ready to launch Starships for the next six to 12 months, depending on the progress at Boca Chica and if the first launches reveal needed changes as well.