I don't think anyone will be surprised if I say we're surrounded by an incredible amount of misinformation.   It seems every aspect of life has become politicized and gets used to raise emotions on one side or the other.

I learned earlier in the afternoon that I had been suckered by one of these.  I saw this Tweet posted as truth and just believed it without questioning. 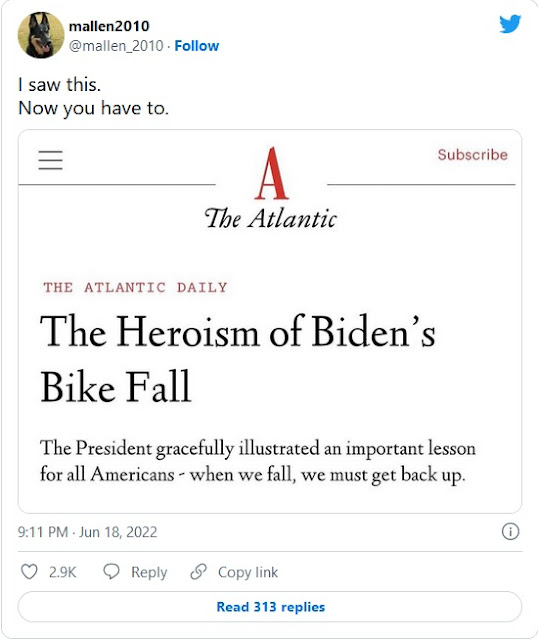 Unlike me, one of the rare, real reporters out there (this one from Reuters) fact checked it with The Atlantic.  A spokesperson said it was fake.

“I can verify that this is not a real article from The Atlantic, and is indeed fabricated,” said Anna Bross the Senior Vice President of Communications at The Atlantic.

It would be easy to ask why such a silly story would be so easy to believe, but the answer to that is so obvious it doesn't need to be asked.  The commercial media is so completely in the tank for Biden we expect this sort of nonsense.

Besides, it's not like the anti-Biden side didn't milk an entire five days worth of news out of the story that he fell off a bike.  My reaction to the fake story was to think it was an absurdly low bar to praise Biden for and that anyone over the age of 10 has probably internalized the "pick yourself up, dust yourself off, start all over again" idea (to borrow a line from a song I grew up with).   Besides; I'm a roadie cyclist who rides with those pedals that lock your foot to them.  While learning how to ride those I fell so often that if falling and getting back up was "heroic," I should have gotten the Congressional Medal of Honor.

Speaking of this sort of reaction to a Tweet brings this one to mind. 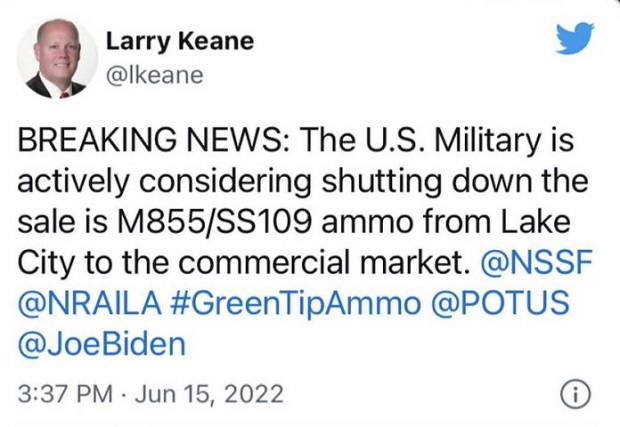 About a week ago, this caused a minor panic and I remember seeing that the Green Tip ammo had jumped in price right after the news broke.

A couple of days later, GAT Daily did a story in a bit more depth.  It's a "Natzo fast, Guido" situation.

The truth here is that Lake City, contractually under the control of Winchester, has been notified it will no longer sell M855/SS109 produced in excess of the military's needs to the public.  Get that?  They're being told that if they overproduce ammo made to that specification they can't sell it.  But they don't produce that - or, at least, not much of it.  The military has been phasing it out for over a decade.

The GAT Daily article speculates that the only M855 that Lake City may be producing is for export to allies.

This policy is telling them they can't sell excess of something they're not even making.  It should have no impact at all.

Now I have to admit I'm not as sure of this one being wrong as the Atlantic tweet, because this was written by one guy, the editor at GAT daily, and doesn't seem to be cross checked.  That said, it seems to be that overreaction to a news story is what's driving both of these stories.