Stop Me If You've Heard This One Before

An important part of Artemis is late and over budget.

It seems like it was only last year that we found out NASA spent almost a decade and a billion dollars on a mobile launch umbilical tower for Artemis.  In reality, it was two years ago in March.

Except that the same thing is happening again right now.  Three years ago, NASA awarded a cost-plus contract to the engineering firm Bechtel for the design and construction of a second mobile launch tower that's bigger than the first one - it's a paltry six feet taller - but sufficiently different that Bechtel couldn't just copy the one that's holding Artemis today out at Pad 39B. 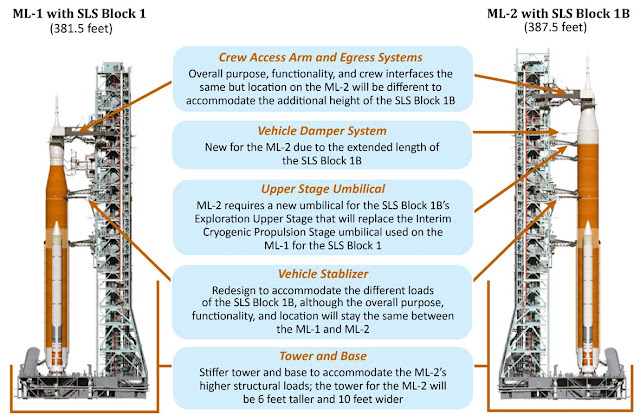 When Bechtel won the contract for this mobile launcher, named ML-2, it was supposed to cost $383 million. But according to a scathing new report by NASA's inspector general, the project is already running years behind schedule, the launcher weighs too much, and the whole thing is hundreds of millions of dollars over budget. The new cost estimate for the project is $960 million.

NASA's Inspector General Paul Martin puts the blame largely on Bechtel but doesn't spare NASA for their part in screwing it up as well.  The agency awarded the contract before design requirements coming from the different upper stage visible in the right side above, called the Exploration Upper Stage, were settled enough to generate requirements for the launch tower.  If you go to the little search bar in the top left corner of this page and enter "Exploration Upper Stage" without the quotes, you'll find that I've dedicated more than a little "ink" to problems with this upper stage.

It would be a comedy of errors if it was even a little funny.

NASA's explanation for doing this is that it had no choice but to move forward with the tower's design and construction to meet a timeline for its lunar missions. The first three flights of the Artemis Program, culminating in a human lunar lander no earlier than 2025, are to fly on the initial variant of the Space Launch System rocket (which has its own, separate mobile launch tower). However, beginning with the Artemis IV mission, NASA wants to launch lunar missions on the more powerful, upgraded version of the SLS rocket, which will require the new mobile launch tower.

Nominally, this mission is planned for 2026, but realistically it will not fly before 2027 or 2028, due to delays in the earlier Artemis flights. Nevertheless, NASA pressed for the construction of this second mobile launch tower to be ready for 2026 and asked for design work to be done on the tower before the rocket's final requirements were known. This is likely to result in additional costs, pushing the price of the second mobile launch tower above $1 billion.

That first paragraph made my head hurt, saying that NASA had no choice but to move forward when the design wasn't known.  That means they went ahead working on things that they had good reason to believe would have to be taken apart and rebuilt differently.  Building things twice (or more!) is a deliberate waste of money.

The job has gotten so bad that NASA has removed work from Bechtel's contract, while continuing to pay them as if they were on schedule.  Earlier this year, NASA and Bechtel agreed to take the development of the umbilical cables and hoses out of the contract.  NASA will choose a different contractor for those, with intent to deliver them to Bechtel when it's time to integrate those into the tower.

Makes me wonder if the contractor (contractors?) for the umbilicals will also be given cost-plus or if they'll be fixed price.  Nothing about the launch tower seems so new and so different from other launch towers that they need cost-plus contracts.  Cost plus should be reserved for developing things for the first time, experimental things; the times when nobody really knows how it should be designed.

Finally, while I'd seen many rumors that NASA has declared the WDR test on Artemis done, the Artemis program blog still hasn't said that.  While poking around and trying to find a second source to confirm one way or the other, I ran into a local TV station's news broadcast saying that in a teleconference Friday, NASA declared success and set a launch date for the first, unmanned, Artemis lunar flyby mission.  The launch date is August 22nd.  Sometime this week, I'd guess Friday, they'll roll the Artemis/SLS stack back to the VAB.  There are things from the WDR that need to be repaired or otherwise resolved, and the flight-graded batteries need to be swapped out onto the vehicle.