As I try to find something worth talking about when nothing big is going on...

The launch window for the Artemis I mission has (more or less) been announced as August 23 to September 6.  The August 22 date I mentioned was wrong.

During a pair of news conferences last week, NASA officials declined to set a launch target for the mission. However, in an interview Tuesday with Ars, NASA's senior exploration official, Jim Free, said the agency is working toward a launch window of August 23 to September 6.

"That's the one we're targeting," Free said. "We'd be foolish not to target that right now. We made incredible progress last week."

Artemis I is an unmanned test flight which will test the Artemis/SLS system completely.  It will fly around the moon, although I haven't seen a detailed mission description.  The second flight called (imaginatively enough) Artemis II, will carry astronauts but will not land on the moon.  At the moment, that looks to be No Earlier Than (NET) 2024.  The lunar landing, Artemis III, looks to be 2025 at the best.  Considering the history of everything to this point, it's probably more like 2027.

Rocket Lab successfully launched NASA's CAPSTONE mission (Cislunar Autonomous Positioning System Technology Operations and Navigation Experiment) this morning (EDT) (video of the launch here).  This mission uses a low power upper stage that isn't a part of the regularly-launched Rocket Lab Electron that launched the satellite, and which will raise the orbit slowly over the next few months until it achieves the desired orbit around the start of November. This is the first attempt to fly an NRHO, which NASA intends to use for the Artemis Lunar Gateway, arguably making this mission the first of the Artemis program.

The orbit, formally known as a near rectilinear halo orbit (NRHO), is significantly elongated. Its location at a precise balance point in the gravities of Earth and the Moon, offers stability for long-term missions like Gateway and requires minimal energy to maintain. CAPSTONE’s orbit also establishes a location that is an ideal staging area for missions to the Moon and beyond. The orbit will bring CAPSTONE within 1,000 miles of one lunar pole on its near pass and 43,500 miles from the other pole at its peak every seven days, requiring less propulsion capability for spacecraft flying to and from the Moon’s surface than other circular orbits.

The NRHO follows an interesting concept and there are some videos worth watching about them. The topic could be a long post by itself.  The video shows how the NRHO can be derived from a Lagrange point L2 orbit, and becomes essentially stable in a lunar polar orbit.  "Essentially stable" means it requires periodic corrections but not as hard to implement as other orbits. 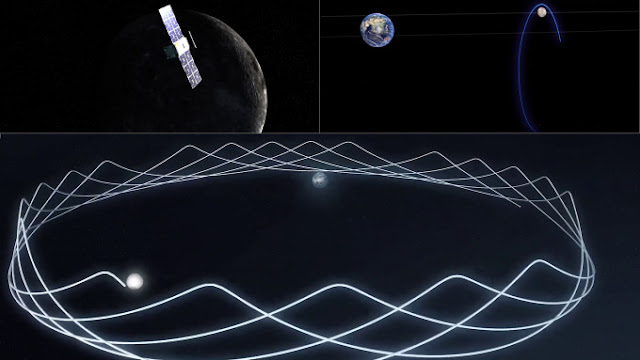 This graphic, from NASA's Ames Research Center, shows the CAPSTONE satellite approaching the moon (top left), the spacecraft's elongated polar orbit around the moon (top right) and the crown-shaped path that lunar polar orbit looks like as seen from the Earth (bottom).

Finally, a short item. If all goes as planned, tomorrow afternoon at NET 5:04 PM EDT, SpaceX will perform their 27th launch of the year, in week 26 of the year.  This year, SpaceX has averaged a launch every 6.7 days.

The mission is a C-band communications satellite for Europe dubbed SES-22.

Built by Europe’s Thales Alenia Space alongside SES-23, SES-22 was originally meant to be a spare for SES-18, 19, 20, and 21, which are being manufactured by Northrop Grumman and were scheduled to launch in pairs in H2 2022. SOme of the Northrop Grumman-built satellites, however, have suffered significant delays. Strangely, while SpaceX’s SES-18/19 launch schedule has become indeterminate, SES-20/21 are reportedly on track to launch on a ULA Atlas V rocket as early as August. As a partial result, SES recently announced that SES-20 will replace SES-22 as an on-orbit spare, freeing up SES-22 to begin operating just a month or two after launch.
...
It will be the first SES satellite launch in response to the US Federal Communication Commission’s (FCC) C-band auction, which paid existing operators to clear a portion of the “C-band spectrum” (radio waves between 4-8 GHz) that is optimal for ground-based 5G networks.

This launch has two things going for it from my standpoint.  First, being late in the day there's usually a good cooling seabreeze, suppressing the heat of the day.  Second, the path goes slightly south of due east from the KSC, which is better viewing for me than those that go to the northeast (most Starlink launches).