Last week, Mrs. Graybeard and I went to see the new Top Gun:Maverick movie.  Yeah, we liked it.  Good, solid, entertaining, movie.  Minimal wokeness, a story about good people doing hard jobs the best they can and always challenging themselves to be "the best of the best."  I think you all know that.  It's not important.

Today, I stumbled into a factoid that I couldn't resist posting.

In any big budget movie like this, the people who are prominent on the screen are not newbies.  They're all going to have big resumes of increasingly important roles.  If you don't know particularly recognize them, that just doesn't mean much.  They're rising stars; you'll recognize them in their next movie.

Despite the minimal wokeness, movies today seem required to have (as humor columnist Dave Barry first said in the 1990s) a mandatorily diverse cast.  The fighter pilots in the movie fit that requirement, including a woman fighter pilot.  Yes, I know there have been some women driving fighters.  No, I don't know how many have been to the Top Gun school.  Furthermore, going into the climactic scenes, you can spot the characters with the most diversity points and tell yourself, "they're not killing off that one." 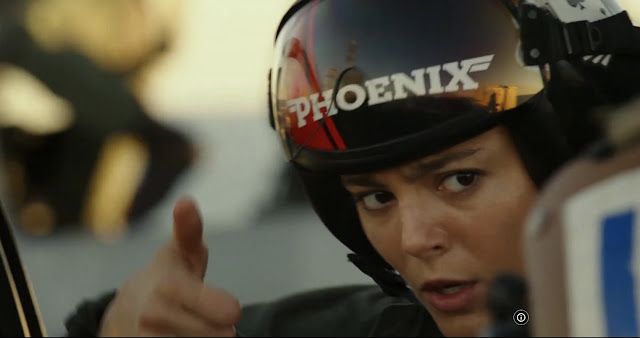 Something happened today (which I honestly don't remember) that caused me to look up her bio on IMDB.  As expected, she has a long resume there, 34 credits covering over two screens full of roles big and small.  Expected because she has one of the biggest roles in the movie and plays it well.

Down toward the bottom of the list, in 2013, only her second year listed on IMDB, was a short called, "It's Not About the Nail."  I almost spilled my tea.  I vividly remembered watching that video back in '13 and have long thought this was one of the funniest concepts for a video I had ever seen.  I may not remember her as Phoenix in a year or two.  I think I'll always remember her in this video.