Missed in the Overnight Tests...

Starting last night and into the early morning hours (eastern time), SpaceX crossed another little milestone that needs to be crossed in the lead-up to the first orbital test flight of Starship/Super Heavy.  After rolling booster 7 (B7) to the launch area yesterday, the booster was picked up by the giant "chopsticks" (which Musk calls Mechagodzilla) and moved it onto the Orbital Launch Mount. 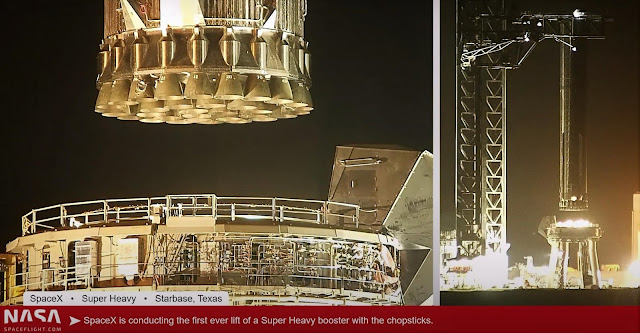 A screen capture as B7 is being lowered into place.  NASA Spaceflight.com photo, used by Teslarati. They have a video of the operations that's already done as time lapse but it's 14 minutes long and can still be gone through faster.

Moving B7 onto the OLM is being widely interpreted as the first step to serious testing of a booster with all 33 Raptor engines installed.  This must be done before any attempt at launching to orbit.

According to CEO Elon Musk, Booster 7 will start by igniting just one or a few Raptor engines. SpaceX has never ignited more than six Raptor V1 engines simultaneously and never tested more than three engines at a time on a Super Heavy booster. That plan could have easily changed, however. Either way, Super Heavy B7 will be treading significantly new ground. Even before actual static fires begin, Booster 7 will also need to complete one or more wet dress rehearsals (WDRs), a test that exactly simulates a launch but stops just before the moment of ignition.

If SpaceX attempts a full wet dress rehearsal, in which the booster would be filled with more than 3000 tons (~6.6M lb) of liquid oxygen (LOx) and liquid methane (LCH4), it would be a first for Super Heavy and just as big of a test of the orbital launch site. Booster 7 will also need to test out its autogenous pressurization, which replaces helium with hot oxygen and methane gas to pressurize the rocket’s propellant tanks.

According to the Cameron County, Texas, Road Closures website, 10AM to 10PM road closures are possible as soon as Monday with Tuesday and Wednesday as alternates.  Could they be ready to start trying cryo testing, or even go as far as a Wet Dress Rehearsal by Monday?