Headline of the Week

It only seems like it has been everywhere all week; it apparently came out yesterday.  The headline is, "World Health Organization will rename monkeypox to avoid stigma and racism."  The story is going around, and not just there on The Blaze.

This immediately makes me think, "who feels stigmatized?"  Not to mention, "who feels it's racist against them?"  Did they ask the monkeys?  Note that I said, monkeys and not Monkees, as if they asked Micky Dolenz, the last surviving member of the band, but if they asked actual primates like chimps or gorillas or other species.  What do monkeys know about racism?  Do they even have a concept for races?

Who comes up with this stuff?

The article goes on to say,

On Tuesday, the World Health Organization (WHO) announced that it was renaming the monkeypox, as Bloomberg's Madison Muller reported. The move comes after over 30 international scientists warned on June 10 that there was an "Urgent need for a non-discriminatory and non-stigmatizing nomenclature for monkeypox virus." The letter refers to the virus as MPVX.
...
Naming diseases “should be done with the aim to minimize the negative impact,” the spokesperson said in an email, “and avoid causing offense to any cultural, social, national, regional, professional or ethnic groups.”

Apparently, much like there was rebellion about calling Covid-19 a China virus, or a Wuhan virus, people have been calling monkeypox an African virus.  Monkeys aren't limited to just the African continent; there are species in south and central America as well as in the Asia.  Antarctica is probably the only continent without monkey species (North America has monkey species, but they're invasive). While it's true that the current variant (also referred to as a clade) of the disease that's spreading the most in the west is from West Africa, there's a more virulent clade with a 10x higher fatality rate, and even seems to be more contagious.  It's from Central Africa.  So we can't call it an African virus if all known clades are from Africa, right?  We have to call it something else.  Right?

Just another stupid news story in year of continuous stupid stories.  A sure sign of people who have no real problems.

Apparently the real source of this silliness and the answer to "who comes up with this stuff?" is this letter, posted to Twitter. 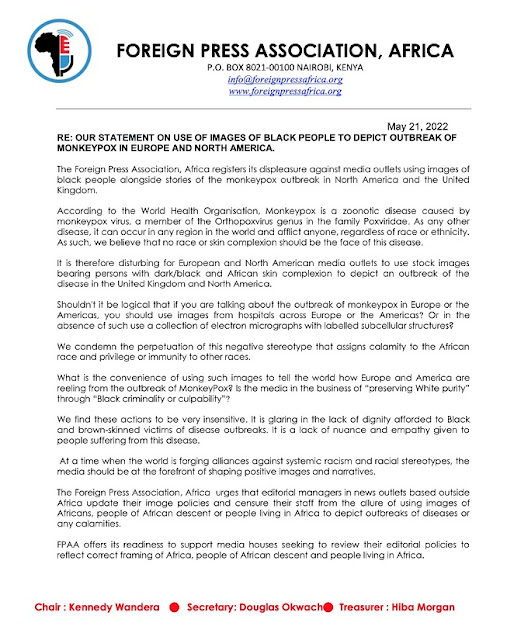 Because they assume that any stock, historical photo is racist, they assume everyone else does.  Much like over 90% of the politics in our country, when one group says another is doing something it seems to always be a prudent assumption that they're just projecting what they do (or would do) in the same situation.  The answer to practically every accusation, including this one, is "project much?"