Yesterday afternoon, around several hours into a road closure and testing regime on Booster 7, something went clearly wrong.

Watch your sound; it's pretty loud.  I recommend watching it full screen at least once.  The explosion was followed by some sort of fires afterwards, putting up dark black smoke which implies something rich in carbon.  Spilled liquid methane?  I don't know but let's assume it wasn't a used tire dump, like in Springfield, near the orbital launch mount.

The fire burned itself out but another started about an hour later.  Booster 7 apparently dumped a large amount of cryogenic liquid, producing a flood that spread around the adjacent pad.  We don't know exactly what it was - just oxygen, methane, or both - but the cryogenic dump appeared to cause a fire to start about 100 feet (~30m) from the booster and orbital launch mount.  The fire burned for about two hours, and while no one was at the pad, if the fire had gotten blown in the wrong direction, it could have made things worse.  I was watching it yesterday by rewinding the Lab Padre camera, but didn't think to write times down.

Within a few hours, Elon Musk tweeted out a cause they had diagnosed, an issue with the way the Raptor 2 engines are started. 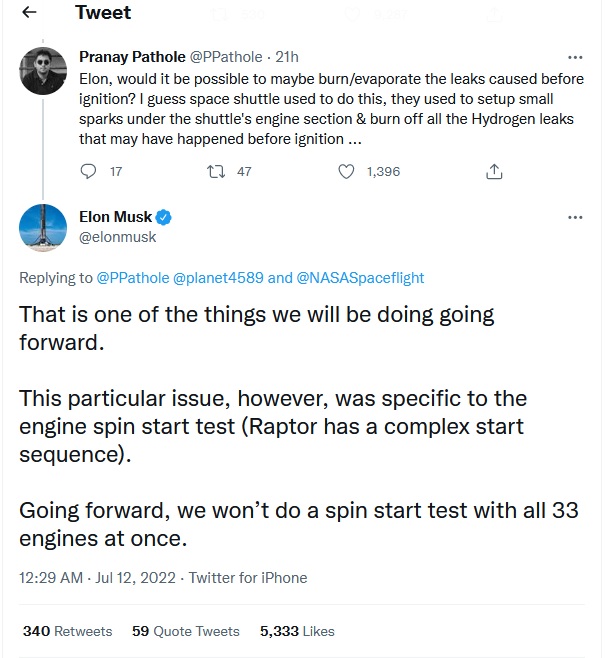 There hasn't been much information released yet on critical things like how much damage the booster or the orbital launch mount sustained, but I'd be surprised if there was none.  SpaceX operates with the philosophy that if you're not failing at all you're not innovating enough.  With that mindset, they have a better chance than other companies to figure out what went wrong and how to get back on track.