Dumbest Headline of the ... Oh, Nevermind

from PJ Media, a story based on coverage from Reason.  A health bureaucrat, as in a state health department officer?  To be as exact in the quote as I can get:

...the Oregon Health Authority’s office for equity and inclusion delayed a meeting with a partner agency on the grounds that “urgency is a white supremacy value.”

Say that again: a HEALTH Authority person thinks urgency is just something those evil, white-privileged people care about?  I can tell at a glance that anybody in healthcare who thinks urgency is some sort of value reserved for white people is not someone actually working with patients at all, and most especially not working in an Emergency Room.  Which is to say they're not healthcare workers and never have been; they're simply bureaucrats.  Furthermore, they've lived such a blessed life that they've never been in a situation where they or a loved one was in need of urgent care in an ER or hospital.

In an email obtained by Reason, Regional Health Equity Coalition Program Manager Danielle Droppers informed the community that a scheduled conversation between OHA officials and relevant members of the public would not take place as planned.

"Thank you for your interest in attending the community conversation between Regional Health Equity Coalitions (RHECs) and Community Advisory Councils (CACs) to discuss the Community Investment Collaboratives (CICs)," wrote Droppers. "We recognize that urgency is a white supremacy value that can get in the way of more intentional and thoughtful work, and we want to attend to this dynamic. Therefore, we will reach out at a later date to reschedule."

Tell you what, Ms. Droppers, I propose an experiment.  I'll put duct tape over your mouth and caulk in your nose to get an airtight seal and see if you feel any urgency about being able to breathe within about, say, 15 seconds.  Or maybe we can induce a heart attack?  Not a cardiac arrest where it's just "lights out" and (if you're lucky) you barely even feel pain, but a racked with chest pain, desperately gasping for air, heart attack.  Think you'll feel any urgency to get help Right Frickin' Now?

In my book, urgency is appropriate when the situations are urgent, like these two hypothetical conditions.  Urgency can be appropriate at other times, such as in the work world when missing deadlines has serious implications.  Droppers' derogatory use of the word urgency for putting off yet another meeting between bureaucrats is a crock.  Blaming it on white supremacy may agree with some book, but it's still brain dead. 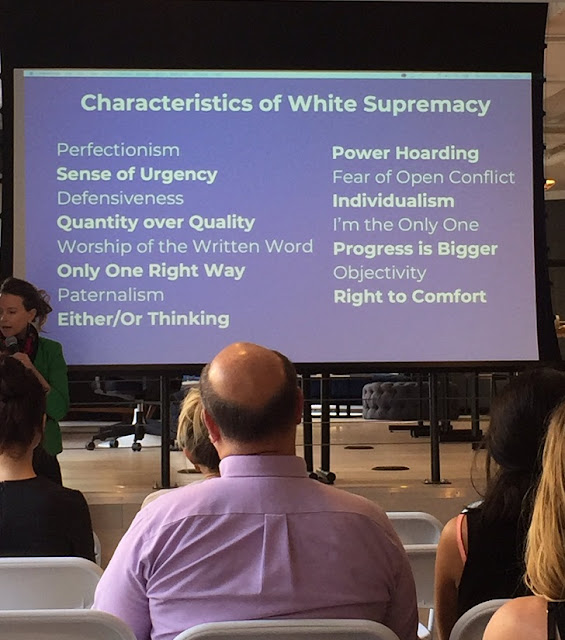 Labels: commies and other idiots, what?