CAPSTONE Is In Trouble

Last week's CAPSTONE mission (Cislunar Autonomous Positioning System Technology Operations and Navigation Experiment) got off to an impressive start.  The Rocket Lab Electron booster functioned flawlessly and the Electron's Photon upper stage gently goosed the orbit a bit higher, firing seven times at key points to raise the orbit’s highest point to around 810,000 miles from Earth before releasing the CAPSTONE CubeSat on its ballistic lunar transfer trajectory to the Moon.  As we posted last Tuesday, it wasn't going to reach the desired orbit until early November, four months from now, so it has a long way to go.

Today, I started seeing rumors online that the capsule might be lost.  I checked the Artemis blog page for it, finding that as of mid-morning, it still had yesterday morning's post saying everything is proceeding normally.

Following successful deployment and start of spacecraft commissioning on July 4, the Cislunar Autonomous Positioning System Technology Operations and Navigation Experiment (CAPSTONE) spacecraft experienced communications issues while in contact with the Deep Space Network. The spacecraft team currently is working to understand the cause and re-establish contact. The team has good trajectory data for the spacecraft based on the first full and second partial ground station pass with the Deep Space Network. If needed, the mission has enough fuel to delay the initial post separation trajectory correction maneuver for several days. Additional updates will be provided as soon as possible.

Like the vast majority of spacecraft, there's no going out on a service call to fix it.  It's even tough to do the Universal Software Fix and turn it off and on again.  On the other hand, the teams that do this sort of mission for a living start thinking about what can go wrong and how to address it long before the satellite hardware is first built.  They often come up with ways around problems.

Probably the champion example in this field is the nearly 45 year old Voyager 2 probe, now in its extended mission.  The "official" mission, the one that was sold to congress was a flyby of Jupiter and Saturn, and that ended 1981.  Voyager 2 launched in August of 1977.  The following April, not even one year into its mission, a capacitor failed in a frequency synthesizer.  It was the receiver's tracking loop, used to tune the receiver to remove Doppler shift effects from the relative motion of the earth rotating and the satellite receding.  The fix was to calculate what the frequency shift would be at the satellite, and then adjust the transmit signal frequency during transmissions to it.  Compensate it on the ground instead of in the satellite.  Voyager has been flying handicapped by not having that circuit since 1978.  Here's hoping they find a way around CAPSTONE's issue, too. 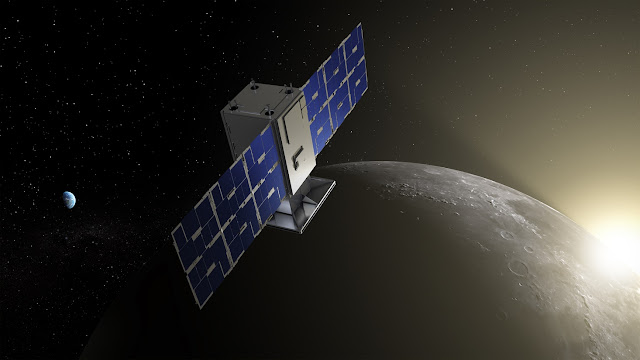 CAPSTONE revealed in lunar Sunrise: CAPSTONE will fly in cislunar space – the orbital space near and around the Moon. The mission will demonstrate an innovative spacecraft-to-spacecraft navigation solution at the Moon from a near rectilinear halo orbit slated for Artemis’ Gateway. Credits: Illustration by NASA/Daniel Rutter